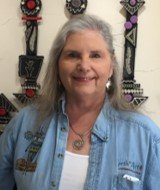 Carolyn Bernard Young was not a born a potter. She did not appear on earth throwing clay and carving animal figures and totems. Her life and her art were formed by her experiences.
I am an enrolled member of the Choctaw Nation of Oklahoma and a registered Choctaw artist. My work is contemporary Native American pottery. With a potter’s wheel and electric kiln, I try to bring a modern voice to the clay, while still honoring the art and traditions of my ancestors. Using a sgraffito technique to carve totems, spirits, and patterns into my pottery is an expression of my deep respect for all Native American culture and especially my beloved Choctaw tribe.
“My current work features Sacred Spirits, or totems, which appeal to a wide audience due to the deep emotional connection the spirits evoke.”
In 1993, Young was traveling in the Middle East while working for an aerospace company. She was spending most of her time on the road and had just lost her parents and an older brother. She began searching for a creative outlet to relieve her stress and took a pottery class at the recommendation of a friend. “When my hands touched the clay, I was lost. I took as many classes as I could,” she said.
She first learned by using a potter’s wheel. Then she took a workshop carving pots while studying petroglyphs and that’s how she began her unique process of carving into the clay revealing what was underneath.
In the meantime, she reconnected with the person who would become her conduit into the most creative part of her life, her husband Sam. They had worked together at General Dynamics in 1978, became friends, and then, as friends sometimes do, drifted apart. In 2011 they found each other again and married that same year. With his support and encouragement, Young became a full-time potter and artist. He poured the concrete for her aptly named studio “Earth to Art.”
“That studio is my haven. I listen to my Native American flute music and tell myself how grateful I am,” says Carolyn. “My work pays respect to my heritage, and I hope brings a modern voice to the Native American art I so love to make.”