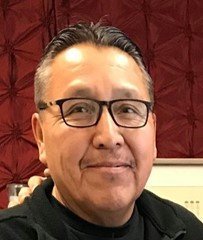 David grew up hearing the stories and teachings of his homeland. In his art, John expresses his own interpretations of his childhood learning with the utmost care and respect. Following his graduation, John returned to his home in Keams Canyon, and what he had learned at his grandfather’s knee came flooding back to his mind. Ever the teacher of Navajo spiritual beliefs, David’s paintings incorporate and reflect the importance of his grandfather’s teachings and his own artistic and spiritual growth. And although he imparts spiritual truths through Navajo symbolism, John uses these symbols to inspire his own expression.

John’s characteristic messenger is the Yei Be Chei, an ethereal messenger to the Dine. Since exact replication of the sacred icon is taboo, he modifies the image to the satisfaction of his tribe’s spiritual leaders. According to collectors, the alteration does not affect the impact of the painting’s message. John believes passing on strong teachings is critical to a better future. He instructs his son and daughter in the teachings he was given. At the same time, he encourages them with 21st century technologies. The children are already perpetuating tradition by selling their own artwork. It all began with his Navajo medicine man great grandfather from whom David K. John learned respect for Nature and the ways of his people.

John has won many awards for his paintings and masks, including awards at the Intertribal Ceremonial in Gallup and the Santa Fe Indian Market. John’s award-winning artwork is also part of the collections at the Heard Museum, Phoenix, AZ; the Navajo Tribal Museum, Window Rock, AZ; the Institute of American Indian Arts, Santa Fe, NM; the Eiteljorg Museum in Indianapolis, IN.

“Paint from your heart; don’t just go along with the latest fad. Your art will last longer then.” David K. John has lived his own words, working from his own inspiration, creating paintings based on Navajo mythology and stories. Communicating a quiet spirituality that speaks universally, his unique expressions are becoming widely recognized and admired.