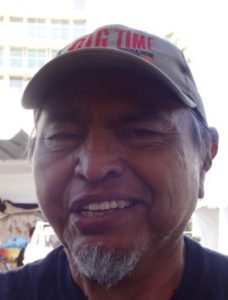 Cliff Fragua is a Jemez Pueblo sculptor and stone carver. He is the only Native American sculptor to have a work installed in Statuary Hall of the United States Capitol:  Po’Pay Statue Commissioned by State of New Mexico for U.S. Capitol’s National Statuary Hall, 2000.

Cliff comes from a family of famed artists, and his mother Juanita and sisters, Glendora and Betty Jean, are highly respected Pueblo potters. He attended the Institute of American Indian Arts in Santa Fe in the 1970s, where he studied with legendary Apache sculptor Allen Houser, who was his mentor.

After creating his first stone sculpture in 1974, Cliff’s work has continued to develop and to show pride in his culture with a deep understanding of the inherent spirituality of the stone.  Cliff said: “My connection with the stone involves spirituality and reverence for the spirit that dwells within.  It has been on this earth much longer than man and for this reason the stone becomes the teacher, it is simply what my ancestors believe.  I am the mediator between the stone and the tools; the stone and the viewer.  I visualize what the stone wants to become and I strive to help it blossom.”

Cliff is always creating new and magnificent stone sculptures that keep evolving with new influences and new interests.  He has won numerous awards from Heard Indian Market, from Santa Fe Indian Market, the Wheelwright Museum and the Native American Artist Invitational. His sculpture appears at the Albuquerque International Airport and in many other public locations. In 2005 he was named Indian Artist of the Year by the Indian Arts and Crafts Association.