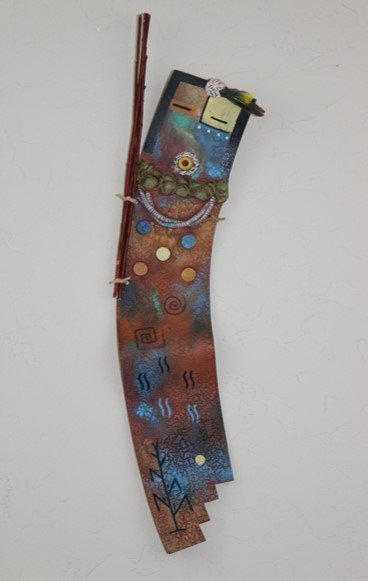 Earlier this year, while I was at the Heard Museum Indian Market, I came across two of my Native American artist friends who have embarked upon new styles of their work. Given that Michael and I had just completed a small book on pottery innovations last fall, their approaches were quite intriguing.

The first approach was by celebrated potter Glendora Fragua of Jemez Pueblo. She took some iconic symbols of her culture, created the pottery elements, and then housed them in a lovely glassed shadow box. Though shadow boxes are not new, her innovation of combining cultural elements in a different format is quite interesting.  It is pottery, but not a pot.  Rather than sitting on a table or shelf, it can hang from the wall as a piece of fine art. I will be quite interested to see if she and others take this innovation in different directions, or if becomes a one-of-a-kind attempt to push the boundaries of her pottery.

Similar efforts have been done by Carolyn Bernard Young, a Choctaw potter who lives an hour or so south of me. Carolyn has taken symbols of her culture, which she utilizes in very striking pottery, and recreated those symbols as a wall hanging totem. Though no longer active on the show circuit, Carolyn continues to press forward with exploring new forms and styles, and has recently announced a foray into sculpture.

And sometimes, innovation comes from artists like David K. John, a well-respected Navajo painter who has begun to produce elegant wall plaques in a style similar to his paintings. The plaques are fired pottery, and then painted with color schemes very reminiscent of his paintings. I have one of his plaques hanging in between two of his paintings, and the trio of art are harmonious and peaceful. David has also experimented with multi-media art, and I have one of his paintings where the surface of the fine art has a 3-D appearance due to inclusion of stone and sand on top of the acrylic.

Another example of mixed media comes from Amado Pena, of the Pascua Yaqui tribe. Born in Laredo, Texas in 1943, Amado celebrates the cultural locations of his people, and gains inspiration from areas like Monument Valley, Canyon de Chelly, and others. His vibrant and bold colors often incorporate physical elements of the Southwest, such as the incorporated sand embedded in the “Sandstorm” original that currently hangs in our Gallery. That inclusion brings a gritty reality to the work, and tells a poignant story of survival among the harsh elements of the Southwest.

Yes, I could go on and on with discussing innovations. They tend to catch my eye as something different – not just the same bowl or pot that has been done thousands of times, but the wings of the artist stretching out to new heights. Sometimes the efforts result in spectacular failures, and never see the light of day. But sometimes, the creative struggles of these very talented artists help to tell a new chapter of the story – the story of their evolving culture and the story of who they are.