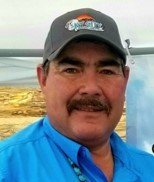 Dan Vallo spent his younger years living on the reservation in Acomita, and there he watched his grandmother, Helen R. Vallo make pottery. Dan also spent some time hunting with his great uncle Clyde, Chief Sunny Skies, who was a well-known silversmith. “This is where I get my artistic inspiration”. Dan now lives in Bernalillo New Mexico with his wife Kelly.

Dan is best known for his flint knapping creations, but wood working has always been his hobby. Dan started flint knapping in the late 1980s. He was inspired by the many arrowheads he found while out exploring the Acoma reservation & hunting in the fall, his father, Henry Vallo, also an accomplished Silversmith. It was his father who showed him the basics of knapping.

In the early days he just made small arrowheads and small tools trying to replicate some of the pieces he found, later on actually using his tools for hunting. Soon after a hunting trip to Africa, Dan began making flint knapped knives with interesting display stands to show off the knife.  The very uniqueness of his art is what makes it so interesting; not one of his knives are the same.

The handles of his pieces are all different, just by the nature of the materials; antler, hardwood, leather & cholla cactus wood, just to name a few.  In 2019 Dan started to use some of his grandmother’s pottery designs on the handles.  Since the natural pottery paints that Acoma potters use is designed to be baked into the clay, the traditional mineral and vegetal paints could not be used.  Dan experimented with various different types of paint and is now using acrylic paint to create the beautiful designs on his art.

Dan started attending various Indian markets in the last few years and has really enjoyed the many fellow artists he has met and the encouragement they have provided regarding his art.