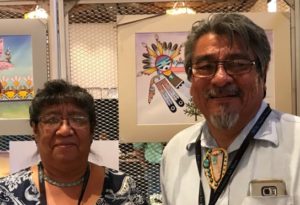 Elizabeth Medina, whose maiden name was Elizabeth Toya, could possibly be listed as a potter from Jemez Pueblo, because that is where she was born and raised.  She married Marcellus Medina of Zia Pueblo in 1978, and moved to Zia Pueblo.  When she moved to her husband’s pueblo, she abandoned her previous style of Jemez pottery, and received permission from Zia Elders to make pottery in the Zia style.  Her new mother-in-law, Sofia Medina, is credited with teaching her the proper processes of making Zia pottery.   Because she has been at Zia Pueblo and has made pottery in the Zia style most of her adult life, she is referenced as a Zia potter. Born in a family of Zia potters in 1954, Marcellus is a self-taught painter and these days, Elizabeth often makes the pot while Marcellus paints the design.

Elizabeth Medina is particularly known for her polychrome ollas and jars, featuring cream-colored and tan slips that her mother-in-law also used, as well as rose-red and orange slips. Her favorite designs include roadrunners, robins, berry bushes, flowers, rain clouds, rainbows, with fine line hatching. She also makes lidded jars, some with bear or turtle effigy lids. Occasionally she produces plain pots for her husband Marcellus to paint with designs of Zia dancers.  She and Marcellus dig up their own clay. Elizabeth then cleans, mixes, coils, shapes, fires, and paints her pottery the traditional way, with natural colors. Elizabeth signs her pottery as: Elizabeth Medina, Zia.

Elizabeth Medina, and her husband Marcellus, are noted in numerous publications and have awards in Santa Fe Indian Market (2019) for several years, as well as other exhibits and shows.