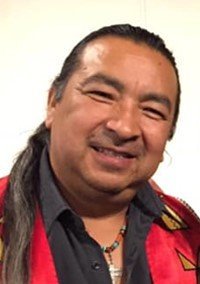 Born in Phoenix, Arizona, Steve Wikviya LaRance was raised in the Hopi Village of Moencopi. His grandfather, a religious leader from Hotevilla, was a major influence on his life. At Hopi he learned the traditional arts of carving katsina dolls, making bows and arrows and working with silver. His first piece of jewelry was a bow guard he wore for ceremonies.

In high school his interest in art increased and he began painting. After high school Steve moved to Flagstaff to study business, but left school to work full time as an artist. He painted for a while, but it was sculpting in stone that excited him. He has become known for his Hopi designs in alabaster, marble and limestone.

Steve creates unique one-of-a-kind jewelry pieces utilizing the Tufa Cast technique originating from the metal smiths of the Native Southwest. This casting technique uses the volcanic Tufa stone found in the region. The tufa serves as the mold in which creative designs are carved by hand into the tufa. Molten silver is then poured or cast into the tufa molds to create beautifully textured artistic creations in jewelry.

Steve is married to Marian Denipah (Navajo and San Juan Pueblo), a multi-faceted artist in her own right. This husband and wife team are making their imprint on Native American art, as individuals and as partners, creating jewelry, paintings and sculptures. They are true artists, loving to create, innovate and experiment. Steve says “When we create art, we share a piece of ourselves with the world.”

He has exhibited his work and won numerous awards at some of the most prestigious Native American Art shows in the nation including The Heard Museum Indian Market, Eiteljorg Museum Native Arts Market, National Museum of the American Indian, and the Santa Fe Indian Market. Steve’s work is found in many private and public collections throughout the world.