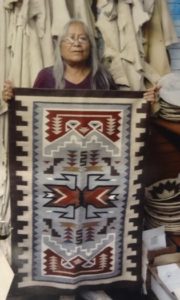 This month, we are celebrating the rich legacy of the Navajo Nation. The two-part blog examines the different forms of art produced by this remarkably talented group of people. The art reflects their environment and culture, as most art does. Because of the dramatic landscapes and detailed cultural history, we find artists from the Navajo Nation creating amazingly expressive and evocative works.

For our Stay In The Know members (yes, membership is free), we will have a series of specials this month on some of our Navajo works of art. Those that remain will appear in the Featured Items section of our website each Friday.

Over the decades, I have fallen madly in love with the beauty of different Diné art forms. This is not to say that the other tribes and pueblos of the Southwest don’t also capture my affection, but there is something quite unique about the Diné. We often call them Navajo, but many in this tribe prefer the use of Diné, which means “The People” or “Children of the Holy People.”

One might speculate that their art has evolved over the centuries as a direct reflection of the harsh environment in which they live, simultaneously incorporating their ability to live harmoniously with Mother Earth. The nearly ten million acres of the Federal territory of the Diné Nation are found in northeastern Arizona and northwestern New Mexico, though there are smaller portions across the Utah and Colorado borders. Much of the land is high altitude and arid, though the mountains do have abundant vegetation. Driving through the Navajo Nation, I am often struck by the almost otherworldly beauty of the land. This duality, harsh versus elegance, has appeared in their many art forms.

The Diné are well known for their textiles, jewelry, pottery, and fine art.  They have been prolific in both evolving existing categories of art and developing new ones. The first part of our blog features textiles and fine art, and the second part features pottery and jewelry.

The oldest category of these is textiles, as the Diné have been raising and shearing sheep for centuries. The wool is hand-carded, and then manually weaved into rugs and clothing. When the Spanish brought the churro sheep to the Southwest in the 16th century, the Diné rapidly adopted this animal for its fine wool. Today, many refer to this breed as the Navajo-Churro sheep, noted for being hardy, easy to raise, and producing a very fine wool for weaving.

For centuries, the Navajo peoples used their textiles for clothing, floor and wall insulation, and for trading. Even today, I cringe at the thought of putting a magnificent Navajo weaving on the floor and walking on it, but that is the main purpose for which they were intended. Rug weaving, traditionally done by women of the tribe, has now become less gender specific as young Navajo of both genders are encouraged to take up the practice.

The large Navajo Nation is divided into chapters, and many of the chapters have evolved their own distinctive pattern style for their rugs. Some of the well-known ones are Two Grey Hills, Ganado, Chinle, Klagetah, Red Mesa, and Teec Nos Pos. The weaver in the photo is Lulu Lameman of the Teec Nos Pos chapter, and this amazingly colorful and intricate weaving was done by her over several months of work. Typically, many of the early weavings were not tagged or attributed to specific weavers, but that practice is slowly changing as collectors become more knowledgeable about weavings.

My favorite style of weaving has always been Two Grey Hills, which utilizes earth tones in their colors and an extremely fine yarn in their weaving. Though the Two Grey Hills trading post is no more, you can find a large selection at Mark and Linda Winters’ Toadlena Trading Post. From Hwy 666 in New Mexico, take the Toadlena/Newcomb exit toward the west, and when you get to the end of the paved road, keep going. The trip is well worth it. Mark has written a seminal work in weavings, The Master Weavers, which I use extensively as a reference. If Mark is at Toadlena Trading Post when you get there, you can even get him to sign it for you.

Or, as you travel through the Navajo Nation, you can stop at places like Chinle, Ganado, Teec Nos Pos, or Kalgetah and find a wide assortment of rugs in local stores and sometimes even the old trading posts. We have done that many times, and always find something that just has to come home with us.

Lacking a written language, the Diné (and most other Native American tribes) used oral storytelling, dance, and paintings to pass their cultural stories and traditions from one generation to the next. The dances are always beautiful to watch, and I particularly like the deer dance and the buffalo dance. Each dance is unique to the tribe, and often unique to the clan within the tribe, so often the dance groups will gather to demonstrate their dances to each other.

The Native American peoples of the Southwest also used petroglyphs to record events and traditions. This has been going on for thousands of years. Some of the more notable examples are found in Arizona’s Painted Desert and in many of the historic dwelling sites like Palatki and Chaco Canyon. These sites have generally been preserved by the National Park Service and are open to tourists. 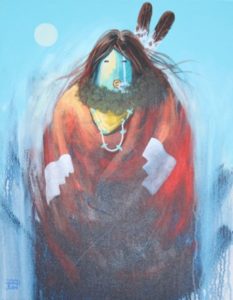 Moving from cave petroglyphs to producing fine art is a relatively new development for the Diné. An artist of national note is David K. John, who has a unique style of depicting Diné spirits communing with Mother Earth and her creatures. The artists must be careful to reproduce the images but without putting in too much detail that it violates the confidentiality of Native American religious practices.

Other Navajo artists we enjoy seeing include Harrison Begay, who was taught in the Dorothy Dunn studio or flat style of Native American life, Harrison Jim, who has painted images on deerhide and other tanned skins that he has harvested, and Robert Manygoats, whose Diné spirits style is similar to that of David K. John.

In our next blog, we will cover some of the art and artists who are working in pottery and jewelry, two of my most favorite categories.