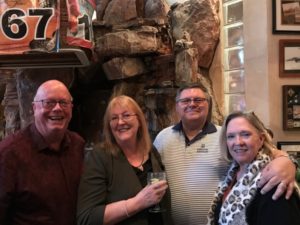 By many measures, Albuquerque is a small town. With a population of about a million, it is the largest city in New Mexico, and has about a quarter of the State’s entire population. But even though it is small, there are many, many activities and events and places that appeal to tourists and residents alike.

Our friends Harry and Elaine came over from London recently, visiting the American Southwest for the third year in a row. As do many people, they have fallen in love with the culture, scenery, and peoples of the region. They are already happily planning on their next trip back to the area.

When they told us earlier in the summer about their planned trip, we put our heads together to figure out what we could show them that they haven’t already seen. We had previously taken them to the Balloon Fiesta and to the Indian Pueblo Cultural Center, two major Albuquerque attractions that should be on everyone’s to-do list. But there is so much more, if one just digs a little below the surface.

This year, we visited the newly relocated Turquoise Museum and also took Harry and Elaine out to the Acoma Pueblo. It was quite interesting to see these through the eyes of widely traveled Europeans, as they saw these sites for the first time.

The Turquoise Museum was quite interesting if you like turquoise, and really, who doesn’t? The museum is set in a very Victorian castle, and carefully explains both the different types of turquoise and the various locations around the world where turquoise can be found. And yes, I did want to try on many of the different pieces on display, but those stubborn glass cases can be so frustrating. This museum has quite a bit of wonderful information, and we will be putting out a future blog that focuses solely on it. Needless to say, we spent a couple of hours touring the museum, and could have spent several more, as there was just too much to absorb in a short period.

Going to Acoma Pueblo was on Harry and Elaine’s short list, as neither of them had been there before. We drove out on a beautiful, somewhat crisp Sunday morning to visit the pueblo, starting with the Visitor’s Center. A walk through the exhibits, which highlighted the story of the pueblo and some of its most famous potters, like Lucy Lewis, was followed by a quick lunch in their café while we waited for our bus to take us up to the top of the mesa. The rest of the visit to Acoma Pueblo is in an upcoming blog, as there was simply too much new information for this blog.

We left Acoma following our illuminating tour, and proceeded to dinner at the Tamaya Resort in the Santa Ana Pueblo. On our drive to dinner, we happily chatted about all the new information we learned about the Acoma Pueblo. Our dinner at Tamaya was planned so that we could see the sunset reflected on the Sandia mountain range, and the moonrise over that range as well. We started with a massive bronze sculpture in the Tamaya arrival area, with an integrated water feature tinkling through it. Then we moved into the obligatory gift shop, which had a surprisingly nice selection of clothing, souvenirs, and transportable pieces of art.

The evening was pleasant, and the patio had infrared heaters, so we sat out on the patio and enjoyed a lovely meal. Both fireplaces were roaring, and the lack of lights on the Santa Ana Pueblo grounds (accented by the manicured golf course view from the restaurant) rapidly gave us a primeval feel of what people a thousand years ago must have seen as they migrated to this area and began to settle in. After dinner, a few adult beverages included, and a scrumptious dessert, we headed back to drop Harry and Elaine at their hotel before heading back to our own.

During the weekend, we revisited other Albuquerque attractions, such as the Indian Pueblo Cultural Center, where we watched the Indigenous Native Peoples day celebrations and dances, and the historic El Pinto restaurant, where we had a quite splendid dinner and (of course) lively discussions about the day.

At first, when Harry and Elaine told us they were coming back to Albuquerque for another visit, we were worried that this town didn’t have enough to do that they hadn’t already seen. As we thought about it, however, we learned that Albuquerque, though a small town, has quite a bit of interesting activities and locations for multiple visits, and both Harry and Elaine were quite pleased with the exhausting itinerary that we put together for their return visit.

At the end of the weekend, we said our goodbyes until next year’s visit, and drove back to our Texas home. We feel like, as accidental “tour-guides,” that we have learned a lot more about the beauty of Albuquerque through the eyes of our British friends than if we were just going around to these sites on our own. This small town, at the base of the majestic Sandia Mountain range, is absolutely packed with exciting things to do and amazing places to see.