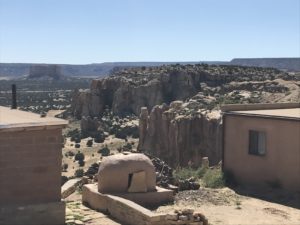 Acoma Pueblo is located at the top of a fairly steep mesa, and the Acoma peoples settled there over a thousand years ago for safety and protection from other more warlike peoples in the area. They built their adobe homes, and each day they would climb down the face of the mesa to farm in the valleys below, and to bring back water and food to the top of the mesa each evening. Even to this day, there is no running water or electricity on the mesa, so residents must bring their own water and use generators if they want power.

Our recent visit from Harry and Elaine included a trip to Acoma Pueblo, as that was somewhere they had never been, but was on their to-do list of activities. So early on a bright, crisp Sunday morning, we left Albuquerque and took the hour long trek west to Acoma.

We arrived at the Acoma Visitor Center, where everyone is required to go if they want a bus ride up to the top of the mesa. No tourists are allowed to drive up there, only authorized residents. We purchased our tickets for a visit – the tours are every half hour, and they go on throughout the morning and early afternoon.

We visited the exhibits at the Visitor Center, which gave us a good overview of both the Acoma peoples and some of the outstanding artists from Acoma, such as Lucy Lewis. We also enjoyed the display of Acoma children learning to make pottery, and are happy that this tradition continues at Acoma. Some pueblos are struggling to continue artistic traditions as their young people are enticed to more traditional Anglo career paths.

Following a quick lunch in the Visitor Center café, we headed to our bus for the quick ride up the paved road to the top of the mesa. Initially the road was created by a Hollywood film crew back in the 1940’s as part of an agreement with the Acoma Pueblo elders to film there, and then was subsequently modernized and paved to its current condition. The road is safe and smooth, but narrow and steep. When we arrived at the top, we were introduced to our tour guide, who proceeded to take us about the pueblo. 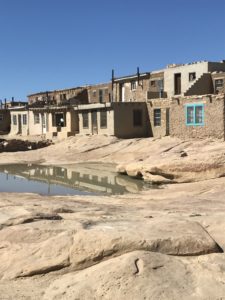 We learned quite a bit from our tour guide, and were able to watch Harry and Elaine as they processed the information. Coming from England, where the history of their land goes back thousands of years, and even further if all of Europe is considered, their perspective was a bit different than those of us who grew up with the newness of this country.

But what Harry and Elaine discovered, as most international travelers do, is that the cultures may have different expressions, but the underlying thought processes of family values, safety, creation stories, and daily life are fairly consistent. The Europeans and the Asians have written histories that go back many thousands of years, but the Native Americans relied upon song and dance for oral communication of their histories, with some pictographs included. The stories, however, are fairly similar.

The Acoma people trace their lineage back to the Chaco diaspora, when the Chaco peoples left the settlements at Chaco Canyon and went out to search for more hospitable lands in which to live. The group that is now Acoma settled on a mesa, but that mesa was struck by lighting while the peoples were down in the valley farming, and they were not easily able to return to the mesa, so they move to another. That second mesa is now what we know as Acoma Pueblo, and some of the homes in the oldest section of the pueblo date back to the original settlement. 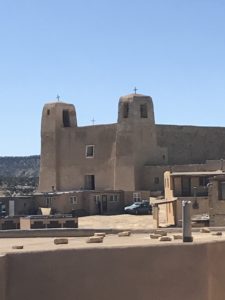 Walking through Acoma Pueblo, particularly with a knowledgeable guide, is almost like peeling back the layers of time. We started with the church, built with slave labor under the guidance of the Spanish conquistadors about 500 years ago, and moving into the older sections of the pueblo, ending up with the very oldest part of the town. 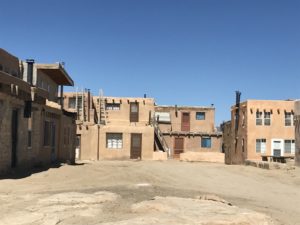 The individual homes are owned by members of the Acoma Pueblo, and are passed down from generation to generation. Each family is responsible for the upkeep of their own home, and most live down in the surrounding valleys because of the modern conveniences they enjoy. About fifteen families are selected each year to live up on the mesa, and they are the caretakers of the pueblo for that year. Only their own homes are maintained by the selected families, so some homes go for years without maintenance. Some have been redone with more modern features like screen doors, windows that open, and other similar aspects, but others feature the original adobe features that one expects to see. There are several kivas in the village, with the two-sided ladders for going up and going down to the kiva entrance. 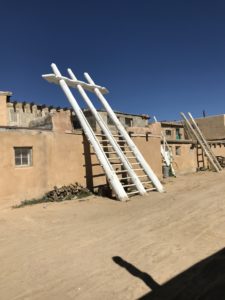 And, of course, there are the artists who bring their wares up to the mesa each day to attract passing tourists. It is not unusual to see a hundreds-year-old adobe home with a new pickup truck outside, with a couple of tables of pottery, jewelry, or other art ready for tourists to acquire. Even up on the mesa, cell service allows the artists to connect with credit card authorization services – if they are on the right side of the mesa, and not blocked by thick adobe walls.

When our tour was finished, we hopped on the next available bus back down to the Visitor’s Center, and got back in our car to return to Albuquerque. Another visit to Acoma Pueblo, but we realized that in our efforts to show it to Harry and Elaine, we learned quite a bit of new information about the Pueblo that we didn’t previously know. Sometimes, a second or third visit somewhere can be quite amazing.