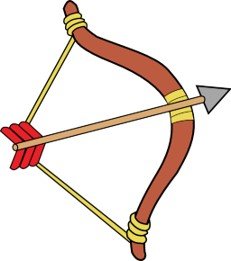 The village was located in a sparse region, but the people were very content with their lives. They existed in harmony with the lands and animals around them, and enjoyed the friendship of other nearby villages.

Every spring, the village held an archery contest. Ten special arrows were made for the archers. The village had only enough resources to make these ten special arrows. The contest was to find the best archer in the land, so archers were invited to come from around the land for this contest. It was one of the oldest and most recognized contests, so archers came from near and far to enter.

Because of the limited number of special arrows, the village elders gathered together and decided who would be the ten archers to compete. For years, the contestants respected the elders selections, and the contest proceeded to discover the best archer in the land.

One year, however, a village archer was not selected to participate in the contest, and that archer was upset. The archer complained loudly to the elders that even though that archer might not be the best archer, the archer’s father and grandfather had competed in the contest, so that archer should also be allowed to compete. Several other village archers, upon hearing this, also complained loudly to the village elders that their fathers had also competed, so they should be allowed to do so by birthright.

The village elders had many long discussions about this. Some elders felt that the contest was to choose the best archer in the land, but other elders were swayed by the complaints, and felt that they should protect the archers from their village. After much discussion, the elders decided to allow the children of former archers to compete, even if they weren’t at the same level of skill as their parents. Birthright, as they felt, was more important than skill.

Over the next few years, more and more of the ten special arrows went to the children of former archers, until finally there were no more special arrows allowed for anyone other than those children. Even if archers from other villages wanted to compete, regardless of their level of skill, there was no room for them in the contest.

The village elders, over time, realized that there might be a problem with their archers. “Why,” they asked, “are our village archers not winning awards at neighboring villages? They win awards in our village.”

So they decided to find out the reason. They invited an archer from a neighboring village to come to their village, and they asked that archer to compete in their competition. The village archers were not concerned, as this archer had only won a third place in any of his competitions, so they did not feel the neighboring archer would be much challenge.

Upon seeing this, the village elders were happy. Surely this average archer from the neighboring village couldn’t match their best archers! The archer drew back his special arrow and let fly, and it hit exactly in the center of the target.

The elders, on seeing this, asked the neighboring archer how his skill level was so good, yet he had not managed to win more than a third place award at other competitions. “Competition drives us to increase our level of skill continually,” he said. “The best archers around the land compete with each other, and drive each other to higher and higher levels of accomplishment. That is how we find the best archer in the land – by skill, and not by birthright.”

The village elders considered his comments, and they quickly came to realize that their decision to admit archers only on birthright and not on skill level, while it seemed the right thing to do at the time, actually hurt their own village archers instead of helping them. The village elders had made a foolish decision, one that was popular among the members of their village, but one that did much more long term harm than good.

So now the village elders had to decide once again. Should they continue to allow birthright to determine entry into the archery contest? What would happen when the contest was completely full of birthright entrants and other birthright entrants were excluded? What would happen if the contest is seen as a mere vestige of its former grandeur around the land?  How could they get their village archers to work to improve their archery skills, not simply to rest on the laurels of the accomplishments of their fathers and grandfathers? The elders knew that they had created a huge problem for their village and for their village archers, and they were no longer satisfied.

The rest of this parable is yet to be written. It will be interesting to see in what direction the village elders choose to go – if they acknowledge their foolish decisions and make meaningful changes, or if they blindly continue down the path of decay.