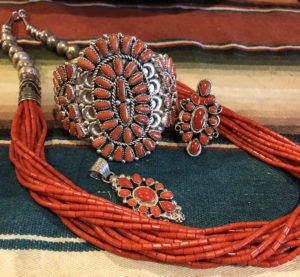 It is no surprise that many Native American jewelers have used coral as either an accent or a centerpiece of their jewelry. The glowing orange and red colors are very reminiscent of glorious Southwestern sunrises and sunsets, and ties naturally into the Native American cultural ties to Mother Earth. The shades of coral are also closely related to those found in different types of pottery, again a close cultural tie to Mother Earth. And yes, the glorious oranges and reds complement the turquoise colors of the sky and the gem, making it a very natural counterpart to turquoise jewelry.

Coral is often featured in necklaces, as the structure of the coral lends itself to heishi and beads that can be cut, polished, and strung. Small coral cabochons are often found in pendants, rings, and even cuffs, but larger cabs are extremely rare due to the way in which the coral was created by the coral polyps.

Unlike turquoise, however, coral is not a gemstone. Technically, it is the house constructed by coral polyps to live in the ocean. These homes are tightly connected and become the reefs that are familiar to us. When the coral polyps reach the end of their lives, the vacant coral reef remains standing. The reefs are in many different shapes, as they grew depending on the water currents, nutrients in the water, and various other factors known only to the coral polyps. 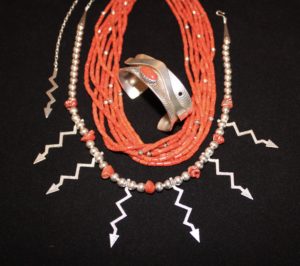 Over the millennia, coral reefs have grown around the world. The largest and most famous is possibly the Great Barrier Reef on the eastern shores of Australia, though there are many more in different seas. The coral most favored by jewelers is that from the Mediterranean Sea, as the colors range from bright orange to a deep, somnolent red. The deeper in the water in which the coral was formed, the deeper red the coral color becomes. 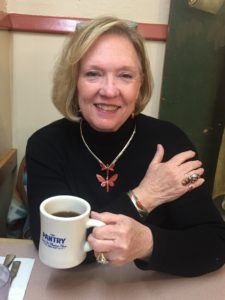 I love the look and feel of coral jewelry and how it complements the turquoise jewelry with which I pair it. I also love the inner glow reminiscent of sunrises and sunsets over the Southwestern mountains and plains. The feeling I get from coral is warmth and comfort, and high quality coral always gives me that tingle when I put it on. Deep red Mediterranean coral and bright orange spiny oyster are two wonderful complements to the blue and green hues of natural turquoise, and pair extremely well with turquoise.