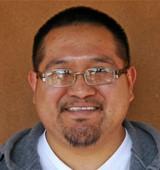 Fetish carver Troy Sice reaches back to a prehistoric Zuni Pueblo tradition in the use of antler and different stone mediums for creating animal and human forms. Troy’s works include sitting and standing bears, frogs, badgers, and corn maidens. Recently he has added unique singing and dancing bears, in addition to his own take on the famous nativity story. Troy also carves the traditional water serpent Kolowisi, as well as Knifewing, eagle dancer, buffalo dancer, and the Hopi warrior woman.

He is a third-generation carver, the grandson of George H. CheeChee, nephew of Ramie and Miguel Haloo and half-brother of Colvin Peina.  His grandfather is known for his bird fetish necklaces and bird-in-flight pendants since the 1930’s. His uncles, Ramie and Miguel Haloo, influenced by their father, started a new trend in the 70’s with their whimsical standing bears carved of deer antler. Soon their nephew, Colvin Peina, also followed their footsteps. Colvin introduced his own style of corn maidens and encouraged his younger half-brother, Troy Sice to do the same. Now Troy’s carvings are very sought after whenever collectors find them.

Troy’s wonderful carvings are found in a number of museums and galleries. These outstanding figures are quite collectable. He won top honors at the 2019 Santa Fe Indian Market with Best of Classification award in sculptures.