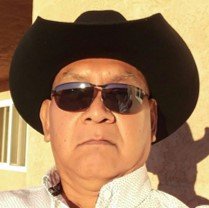 “Good thoughts and a good heart are essential in working with your clay because you are creating yourself in each pot as you coil and when you are ready to paint the pot, a clear mind and good heart is crucial in assisting you with your painting because the designs flow through your mind into your hand and onto your pot without difficulty.”

Stetson Setalla is from the village of Sichomovi, which is one of the three villages known as First Mesa (Polacca), and is a member of the Bear Clan. He is the grandson of the famous “Paqua Naha” who paved the way for elegant white slip Hopi pottery. Stetson was inspired to continue the family tradition of pottery making from his Mother, Pauline Setalla. There are other wonderful Hopi potters in his family including Agnes Navasie (grandmother), Eunice Navasie (aunt), Agnes Nahsonhoya, and Dee Setalla (siblings). Stetson is also related to many well-known potters which include: Eunice “Fawn” Navasie (aunt), Dee Setalla (brother), Sylvia Naha (cousin), Burel Naha (uncle), Gwen Setalla (sister), and the famous Joy “Frogwoman” Navasie.

Stetson began making pottery at the age of 19, immediately after he graduated from High School. In the beginning, it was just a hobby for him, yet it paved a path for him to become a superb artist. He also works as a seasonal fire fighter with the Coconino Forest Service, which keeping him busy during the summer months. “I enjoy the hard work that goes with the job and when I return home, I am anxious to sit down with my clay to be within myself once again.”

All of his pottery is made from Mother Earth. The clay is dug up within the grounds of the Hopi Reservation and natural vegetables and minerals are used for colors. He fires his pottery outdoors with sheep dung. Stetson signs his pottery with his trademark bear-claw/raincloud symbol representing both his mother and father’s clans.

Stetson has been an active potter since 1980 and has been featured in many major works on Hopi pottery, and shows at major competitions and venues throughout the Southwest. His work is also featured at the Heard Museum in Phoenix, Arizona; and the Museum of Indian Arts & Cultures in Santa Fe, New Mexico, and The Dancing Rabbit Gallery. In 2011, The Setalla family was inducted into the Keepers Hall of Fame at the Kierland Resort in Scottsdale.