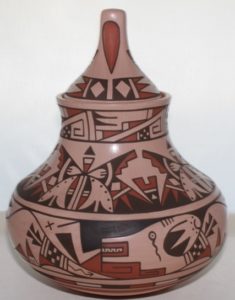 Yes, I freely admit it – pottery has always been my first love. I am fascinated by the traditional methods that Native American potters use to gather their clay, grind and sift it, create their amazing designs, paint the pots, and fire them. It is an extremely laborious process, and all too often we forget the time and energy that went into creating each fantastic work of art.

This has been going on for thousands of years, with pottery sherds from Anasazi and Caddo dwellings giving glimpses into the utilitarian approaches that developed with pottery. We also see the evolution of important designs painted onto the pots, reflecting the awareness and unity of these potters with the world around them. My gallery, for example, uses an old Anasazi symbol for a dancing rabbit in my logo.

Last August, I had a chance to explore the San Ildefonso exhibit at the Santa Fe Museum of Indian Art and Culture (MIAC), where they brought out dozens of pots from their vaults that reflected the variety and evolution of San Ildefonso pottery. The panel discussion held in MIAC’s auditorium was riveting, as artists and elders discussed the quite emotional creation and presentation of the exhibit. Erik Fender and Russell Sanchez spoke of San Ildefonso elders who came to see the exhibit, crying with tears of pride at the elegance of the pieces and the family histories behind them. It was a very emotional exhibit opening, with many San Ildefonso residents seeing for the first time the works of their parents, grandparents, and other family members, pointing to the pieces, and expressing their admiration and wonder of these pieces. Many happy tears were shed, including quite a few of my own.

This led me to further discussions with Erik, who is very forthcoming and educational about the history of San Ildefonso pottery and the potters who created them. He feels, to his very core, the rich heritage and legacy created by these potters, and is on a personal mission to recreate many of the lost styles or techniques from prior centuries.

We often think of San Ildefonso pottery as black on black, due to the tremendous popularity of this style when it was introduced by Maria and Julian Martinez in the late 1920’s. Prior to then, 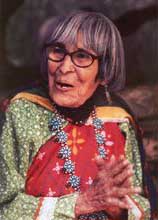 polychrome pottery had been common at San Ildefonso, but was rapidly overshadowed by the black on black style. Maria and Julian are frequently credited with moving pottery at San Ildefonso from strictly utilitarian uses to collectible art forms. Previously, pottery was created collaboratively by families or clans, sitting around a table making storage jars or stew pots or whatever else was needed. And that continued after Maria and Julian began selling their pots as art forms, but potters at San Ildefonso rapidly recognized the artistic potential of their efforts.

Following Maria and Julian, their son Adam and his wife Santana extended the black on black style, sometimes collaborating with their parents for different structural designs, but remaining fairly constant with the black on black approach.

Following Maria, other potters at San Ildefonso saw what was selling and getting recognition and rapidly moved in that direction. Popovi Da (one of Maria’s sons) and his son Tony Da rose in prominence, with Popovi Da introducing the black and sienna style and embedding turquoise into his pots. Tony Da introduced sgraffito etching, inlaid beads and stones, and elevated San Ildefonso pottery to very collectible levels during his fifteen-year pottery career. Following a motorcycle accident in 1982, Tony Da moved into painting and became known as a very accomplished artist in this medium as well.

The efforts of Tonita Roybal, Blue Corn, and Tse Pe also elevated the status of San Ildefonso as a significant center for high quality pueblo pottery. 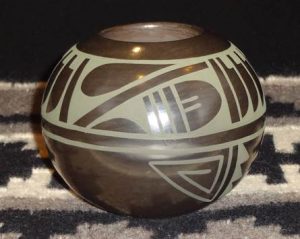 Carmelita’s daughter, Martha Appleaf Fender, continued the trend of innovation in glazes, and produced a green on black design that was truly unique. She was concerned that it was so different that it wouldn’t be appreciated, but to her surprise, her green on black pieces eventually garnered attention and awards.

From Martha, “The funny thing about winning the best of traditional pottery award was that it was for a green slip on black jar. The first time I tried to enter a pot with the green slip years before, I was given a hard time about the color of the slip.” Martha won the Best of Pottery award at Santa Fe’s Indian Market in 2010, as well as the Tony Da Award for Excellence in Pottery the same year. Two years later, she won another Tony Da Award for Excellence in Pottery.

Martha handed down her skills and techniques to her son Erik Fender, who has been working for quite a while to reintroduce styles, and even recreate or rediscover some of the techniques for San Ildefonso pottery that were lost when styles changed. His process requires a lot of experimentation and discovery of what works, and often produces unintended results. But Erik feels a tremendous amount of satisfaction when he is able to rediscover a lost technique, and bring this knowledge back to San Ildefonso potters.

Erik uses his amazing talents as a potter, painter, and jeweler to produce outstanding works of art. As one of the foremost artists today, he spends endless hours teaching other Native American artists at the Poeh Cultural Center, conducting public demonstrations of his pottery techniques, and helping to preserve the significant legacy of San Ildefonso artists. The creative spark initiated by Maria Martinez burns bright in her lineage, giving Erik both inspiration and dedication to his artistry.

The MIAC exhibit on San Ildefonso pottery was eye opening to me and many others, but sadly under-appreciated because of the museum closure due to the pandemic. The San Ildefonso exhibit is scheduled to close this month, but we are hopeful that MIAC will leave the exhibit up for another year to showcase the variety and innovation shown by the San Ildefonso potters.

What we see in the MIAC exhibit, the displays at Poeh Cultural Center, the Santa Fe School for Advanced Research, and around the country at highly regarded museums, is that the creative spirit of San Ildefonso pottery is becoming quite widespread and extremely collectible. Prominent artists like Russell Sanchez and Erik Fender are in high demand. I believe the interest in Sal Ildefonso pottery is due to the combination of traditions of the past combined with innovations of the present and future. It is quite exciting to see what this creative energy might produce going forward. And yes, I am sure more happy tears are on the horizon for me regarding San Ildefonso pottery.