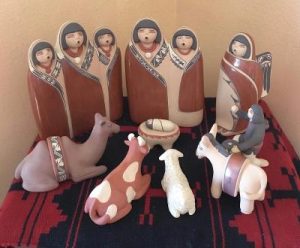 At this time of year, thoughts begin to turn toward the end of year celebrations observed by most faiths around the world. Christmas is a popular celebration in the Western world, and has been for almost two thousand years.

We all know the story of a father and expectant mother, traveling through the winter storms to reach their home, and stranded in a small town where the only lodging available was a small stable for animals. There, surrounded by donkeys, horses, and other creatures, the mother delivered a tiny infant and their small family grew from two to three.

Not an unusual story, as this happens to young families more often than we would expect. First-born children are notorious for emerging into the world on their own schedule, whether or not it is convenient for the new parents.

This particular event is one that is celebrated throughout the Christian faith, as it represents the birth of Jesus, the son of God, and the beginning of the Christian religion. Over the years, the stable scene has been recreated in paintings, with actors and real animals, and in many other creative ways.

One that has taken hold in particular is the nacimiento, which translated from Spanish to English means birth. The nacimiento is typically a set of carved figurines, ranging from a very basic set of three figures for Joseph, Mary, and Jesus to more elaborate sets of figurines including stable animals, the three Wise Men who traveled to Jerusalem to give the new baby Jesus their gifts of gold, frankincense, and myrrh.

The tradition of the nativity was one brought by the Spanish to the New World five hundred years ago, and both colonists and Native Americans embraced the story and created their own nacimiento sets. They began to appear for sale to collectors in the early to mid-20th century. My mother acquired one of her first sets from her dear friends Ivan and Rita Lewis of Cochiti Pueblo, a gorgeous white set that my sister Maggie lovingly displays each winter. Later, I acquired a splendid set from mother’s dear friends Dorothy and Paul Gutierrez, Santa Clara pueblo potters. This amazing black on black pottery nacimiento set is unique and I treasure it. 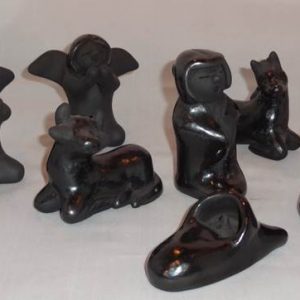 Recently, I had the opportunity to chat with Maxine Toya of Jemez pueblo, a wonderful potter and a dear friend of mine. She has made nacimiento sets for years, and her detail work and polishing skills are quite superb. I asked Maxine to make a set for me, and we decided on a dozen figures in the set. Maxine does an amazing job with tan and red clays, lending her own distinctive personality to her pottery. Because of the care and attention that Maxine gives to her work, we both knew it would be almost six months before she completed the set. I am looking forward to putting it out this winter alongside my set from Dorothy and Paul Gutierrez.

Nacimientos are a representation of family and faith, and particularly this year with the struggles of the pandemic, family and faith are more important than ever. Many of us look on 2020 as the year that wasn’t, given the lockdowns and quarantines that took place around the world. I choose to look beyond these struggles, and look at 2020 as a year of renewed family and faith, and my wonderful nacimiento set by Maxine Toya will always remind me of the importance and power of these two things. Regardless of your culture, your faith, your beliefs, or your upbringing, you are still part of a family. In the greater sense, we are all part of the same family, and though we may have small differences from time to time, at the end of the day we are still family.