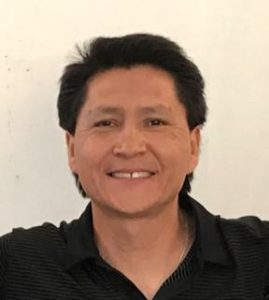 “It seems I’ve been developing my skills in clay to lead me to work in bronze, and working with bronze has enhanced my skills with natural clay.” Joe Cajero, Jr.

Joe Cajero, Jr. was raised in the Pueblo of Jemez. While growing up, Joe listened to the wonderful stories his grandmother would tell, giving him a solid foundation of his traditional culture and laying the foundation of the incredible bronze art he does today.

Joe’s first piece of pottery was a little bear which sold immediately, which seemed to form the path of his career.  He studied art and pottery at the Institute of American Indian Arts in Santa Fe after high school.

Although Joe still creates beautiful pottery, including the koshare figures for which he is internationally known, recently he has begun making limited edition bronzes.  Joe’s sculptures are hand-formed from clay and then cast into bronze using the lost wax process. He uses patina colors to complete the story of each piece.

Joe has won numerous awards from the Santa Fe Indian Market and the Eiteljorg Museum Indian Market. He has also been named a Local Treasure by the Albuquerque Art Business Association and the City of Albuquerque for his contributions to the arts community. Joe received a Living Treasures Award – Native Treasures – Museum of Indian Arts and Culture, Santa Fe, New Mexico in 2014. His work is found in museums and private collections around the world.