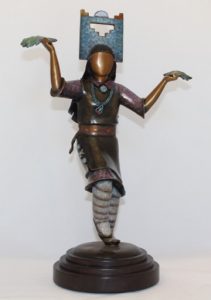 Bronze, which is roughly 80-85% copper and typically 12-15% tin, was rapidly accepted because it was easier to mold into finely detailed objects. Bronze is also harder than natural copper or brass, and lent itself to the creation of artistic representations of nature, royalty, and other subjects. As a result, bronze artistry flourished through the Bronze age, lasting roughly from 3000 BC to about 1200 BC, but also continued through the Dark Ages (Rodin, for example, with a stunning array of sculptures) and up to modern times.

Through talking to a number of Native American bronze sculptors, I learned a bit about how bronze sculptures are made. It is a long, time consuming process involving many steps, with a mistake in any one of those steps resulting in a ruined sculpture.

The artist will painstakingly construct a replica of what they want the sculpture to be, generally out of clay or wood. From that replica, a silicone rubber mold is made. Carefully peeling off the silicone rubber mold, a shell is created into which hot wax is poured.  When the wax cools, a copy of the replica results, only in wax instead of clay or wood. The wax is carefully covered in ceramic powders which then harden into a strong mold. The wax is melted off and molten bronze is poured into the ceramic shell, which leads to the term “lost wax method” of casting. Following the cooling of the bronze, the ceramic shell is chipped off and the bronze is air-blasted to remove any shell remnants. A nice acid bath gives the bronze its recognizable dull gold color patina. Many artists take the next step and have the bronze “painted” with different acids to provide colors to the bronze. Generally, bronzes are only produced in limited (and numbered) quantities, and when the quantities are completed, the molds are destroyed so no others can be made from them.

There are other metals that man has learned to create and utilize, but bronze is preferred by artists due to the exquisitely fine details capable when it is poured. Other metals, such as iron, are equally as old as bronze. For example, iron was utilized in Mesopotamia (modern day Iraq) as long ago as 5000 BC, and in Egypt as long ago as 3000 BC, roughly contemporaneous with bronze. But these other metals had different applications based on their ease of making, durability, amount of detail allowed, and cost of acquisition.

The Bronze Age was an almost unparalleled age of trade and commerce throughout the Mediterranean and Middle East. The Egyptian, Hittite, and Mycenean empires flourished, and as often happens, engaged in periods of peaceful trade and barbaric conquest. But the Bronze Age came to a rough halt around 1200 BC, most likely as a result of a major decades long series of earthquakes that leveled cities, caused drought and famine, and crushed Mediterranean and Middle East civilizations. Archaeologists have excavated the ruins of their cities, and bronze sculptures are one of the main ways in which we are able to piece together their stories and civilizations.

Fast forward through the Dark Ages and the Middle ages to today’s world. Once again, bronze sculptures are flourishing, as the techniques developed many thousands of years ago are being utilized and refined to create magnificent art. Native American artists, blessed with an abundance of copper in the American Southwest, have taken this opportunity to move beyond paintings, pottery, and jewelry into very long lasting statements of their culture. Kim Seyesnam Obrzut, for example, honors her Hopi culture with gorgeous statues representing Hopi women and aspects of Hopi life. Upton Greyshoes Ethelbah Jr. creates amazing sculptures of figures representing both of his White Mountain Apache and Santa Clara Pueblo cultures. And there are many more, working in bronze, stone, wood, and even metals like gold, silver, and iron. The creative talents of these Native American sculptors tell vivid stories about their cultures and peoples, and someday these stories may be unearthed by archaeologists from the future much like we learned about the Hittites and Myceneans from their ancient art.

Art endures, and art tells vivid stories. Art helps us learn about different cultures and learn about the peoples in those cultures. I appreciate the fine detail in bronze sculptures, and enjoy hearing the artists tell me the stories of their cultures.

Bronzes can be expensive, depending on size and amount of detail. Surprisingly, the artist really doesn’t make much money off of bronzes, as most of the cost of a bronze is the foundry materials and casting process. That hard cost bottom means artists who create bronzes are much less likely to offer discounts, as there really is not much discount to offer. These sculptures are creations of love, a much more detailed expression of the soul of the artist than we might see in baskets, carpets, or even some other forms of Native American art.

Bronzes should be reverently viewed as investments, not only in one’s own art collection, but in the preservation of the stories of these cultures for the ages. As we saw with the natural disasters that put a calamitous end to the Bronze Age, our existence on Mother Earth is much more fragile than we imagine, and there are no guarantees that our way of life will persevere through the ages. As we have seen with the pandemic, with global warming, and similar ecological shifts in our existence on Mother Earth, life is fragile and should be treasured. And bronze sculptures are one small way to extend our stories into whatever existence the future will bring.