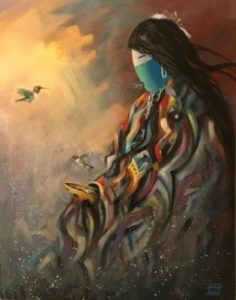 Beginning in the middle of March, The Dancing Rabbit Gallery is presenting an online exhibition of the art of David K. John.  He is an internationally recognized, very talented Navajo painter. Over the past 30 years, David’s style has evolved to where his work is immediately recognized by a large group of international art collectors. The color palette he has selected, focusing on the reds, tans, turquoise, and golds found so often within the natural environment of the Navajo Nation, are both inspiring and soothing at the same time.

Many Navajo youth grow up drawing and sketching the immensely dramatic scenes around them. Towering mountains, dramatic arroyos, eyepopping sunrises and sunsets – all combine to turn this often-arid land into spectacular scenery. Living in harmony with Mother Earth, the Navajo learn early in life to observe and honor the land around them.

David grew up in Keams Canyon, heavily influenced as a youth by his grandfather, a Religious medicine man in his clan. Close ties to cultural elements and oral histories of the Navajo peoples were embedded deeply in David as he grew up, and he naturally took up sketching and drawing these elements. Initially, seeing all the talented Navajo youth artists around him, David thought he had no talent in this area, but he persisted. Taking an art class in high school exposed him to new techniques, and David began drawing and painting portraits and scenes of nature, as were the other young artists around him. He found that he really enjoyed the feeling of bringing images alive and telling stories with them.

David earned his Bachelor of Arts degree and began a serious career as a painter. Early experiments with different mediums convinced him that acrylic was the way he wanted to go, so that became his medium of choice. David began painting some of the cultural elements of his people, soon moving to the spiritual connection between the Holy Ones and the real world, represented by his paintings of Yei figures and their messengers.

Recalling the teachings of his grandfather, David was very careful to review his paintings with elders in the village before showing them, as many symbols and representations are only for the eyes of the Navajo people. He has accurate representations, but will change a symbol or pattern enough to preserve the secrets of his religious beliefs.

Earlier this month, David and his wife Kathleen and their young daughter made the trip from Kayenta, where David and his family live, to our new home in Santa Fe. We had a wonderful visit, and talked about the upcoming exhibition.

One of the surprising facts that I learned while David was here was that the painted pottery masks he makes are representations of the hand-carved painted wooden masks that are used by the Navajo during their ceremonies. David was quite generous in sharing lots of background knowledge with me, and I learned quite a bit of the interpretation of images in his paintings. He continues to explore different innovative techniques, and I am fortunate to have acquired one of his multi-media paintings.

It turns out, not surprisingly, that David’s wife and daughter are also talented artists. One of the masks that we originally included in the Exhibition was actually done by David’s wife, and she and her daughter have done other pieces as well. I learned right away that Kathleen was a retired school teacher, as I was, so we had some chuckles about the commonalities of classroom teaching, even in different cultures. 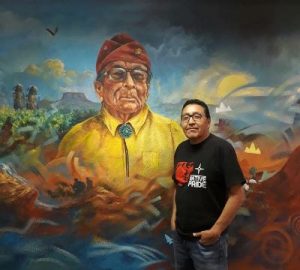 But I also wanted to learn more of David the man, beyond just the paintings he produces. I learned that last spring, right at the start of the pandemic, David did a very large mural at the Kayenta Middle School library, honoring the Navajo Code Talkers from World War II. One wall of this mural is included in the Exhibition, but it goes around the entire room. Michael and I are eager to visit Kayenta and see the full mural. David also recognized the severe impact on the community of the pandemic, and he was generous in giving small paintings to his community members to help keep up their spirits.

I learned that David is an amazing family man, as he and Kathleen have been together for over 30 years and have raised two stellar children. David and Kathleen met in college, and soon began a storybook romance.

As we talked, I found David to be a warm and supportive person, calmly sharing the stories of his culture to educate and inspire. Education is one of the prime tenets of my Gallery, and I am always happy to encounter an artist with the same philosophy. But far too soon we had to end the visit, as David was headed up to Taos on other business. It was a wonderful visit, and we look for many more visits in the future.

The Dancing Rabbit Gallery is so excited to be able to present this Exhibition of The Art of David K. John and share his astounding talent with each of you. Art is a window into the soul of the artist, and David has shown us vistas and cultural images that enrich and elevate all of us.

If you see something in the Exhibition that you like, please feel free to contact David directly to see if it is available, or if already sold, ask him if he could paint you something similar. We have a small number of his works in our Gallery as well. Also feel free to share this Exhibition with your friends, as we are proud to give David the acclaim that this very humble man rightfully deserves.