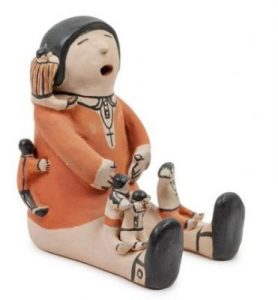 At the end of the 19th century, railroad expansion throughout the Southwest brought quite a few tourists to the New Mexico area. Those tourists found exciting new cultures in the pueblos and tribes that lived in the area, and often stopped to chat, take photographs, and purchase souvenirs.

Enterprising Native American artists took note of the tourist desires for souvenirs and rapidly began accommodating this market. Jewelry and small pieces of pottery, including pots, candlesticks, and ashtrays, were the primary items sold, as they were easily transported back to the Eastern part of the US by the tourists. 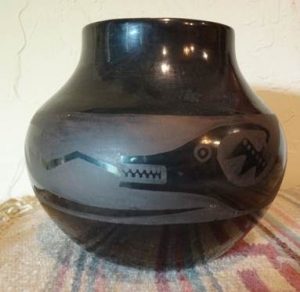 I have a personal connection to this time period, as my great-grandmother traveled from Oklahoma to New Mexico as a tourist in the 1920s and 1930s. She brought back several small bowls, including one she bought in 1932 from Maria Martinez in Maria’s home. Fortunately, she included a small index card with the provenance (and $3 purchase price!) of her purchase from Maria, and we still have that bowl in our Gallery today. Other items were bought from artists in other pueblos and we even have a Hopi bowl from the three mesas of the Hopi territory. Those adventures started my family on a lifelong adventure exploring Native American cultures of the American Southwest, leading to the formation of The Dancing Rabbit Gallery by my mother in 1980. We all grew up in my family immersed in Native American art and culture.

Potters began making figures as well as the small bowls, looking to the world around them for inspiration and models. For the first 20 or 30 years of the railroad incursion into the Southwest, Cochiti potters in particular were well known for producing pottery figures of the types of individuals who came on the trains – priests, cowboys, businessmen, opera singers, and circus performers. But then several artists began fashioning figures from within their own cultures as well.

The singing mother figures came into being around the 1870’s, first documented from the Cochiti pueblo. The figures were also known at the time as singing ladies or Madonnas. They always sat with their mouths open.

These small figures represented the manner in which Puebloans passed down the culture and tales of their pueblo from generation to generation. As time passed, the singing mothers began to have infants and small children attached to their figure, and began to be called storytellers because of the attached babies. The figures also began to grow in size. 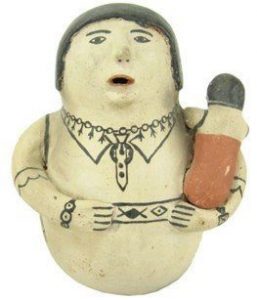 One of the first important creators of the singing mother figures was Laurencita Herrera of Cochiti. At the Jemez pueblo, Persingula Gachupin and Marie Gachupin Romero are known as some of the earliest creators of singing mothers for the tourist trade.

The market for the Cochiti figures began to decline after the turn of the century, and languished for roughly the next six decades. Figures were still made at Cochiti during this time, but they were smaller figures of drummers, corn dancers, mothers with children, and other similar figures. The quality of the figures also noticeably declined.

About 1964, Helen Cordero of Cochiti began a revival of the storyteller, but with her own personal spin. Prior storytellers had all been female, typically with a number of babies attached. Helen decided to create the first male storyteller to honor her grandfather. The high quality of her storytellers led to a resurgence of interest, and other Cochiti potters embraced the revival with additional works of higher quality.

A couple of decades later, Ivan Lewis initiated his own revival of the early Cochiti figures, bringing back the cowboys and other similar caricatures of western tourists from a century ago. Highly collectible today, Ivan’s figures were both reminiscent of the ones eighty years prior, but also executed in a much higher level of quality. Ivan and his wife Rita created many wonderful storytellers as well.  Even today, other potters such as Virgil Ortiz of Cochiti are emulating the caricatures revived by Ivan. 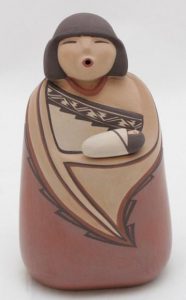 Also following in the steps of her predecessors, Maxine Toya of Jemez pueblo evolved the storyteller figures into another important cultural element, the town crier. This male figure represents the individual who would offer prayers for a good harvest throughout the pueblo every evening between the last frost of spring and the following first frost of winter. Maxine’s elegant style and polishing and painting quality have made these town criers also highly collectible.

None of this is new. The creation of clay figures to represent stories has been around for thousands of years, used within the pueblos or used for trading between pueblos. The styles and figures, particularly those of animals, are very similar to those found by archaeologists in pre-historic dig sites. Modern potters are honoring their culture and their traditions by continuing to create the singing mothers and storytellers, and also giving us a small window into their cultures. With this small window, we are better able to understand each culture. With this understanding, we can appreciate the stories told to us by the artists of their origins, their lives and their hopes and aspirations for the future.