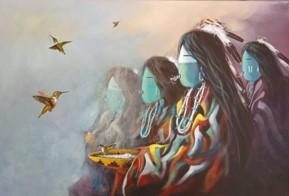 For the past two months, we have had the opportunity to showcase the tremendous talent of Navajo painter David K. John with an exhibition on our website. Because of this exhibition, and the resulting media coverage it has received, David has received a lot of highly supportive feedback regarding his work.

Your feedback has sparked increased inspiration with this wonderful artist, and we wish to convey our most humble thanks – both from David and from us – for your encouragement, insights, and support of his work. David’s inspiration has led him to produce a number of new works, several of which made their way to our Gallery and several of which are either client commissions or works in progress.

Inspiration is the lifeblood of an artist. It allows the artist to tell a story, convey emotions or beliefs, or dig deep into places, events, and people real or imagined. The talent of the artist is the ability to convey that inspiration into a piece of art that connects with the imagination of the audience.

David uses a specific color palette for many of his compositions, derived from the natural colors of his northern part of Arizona. The land around Kayenta is ruggedly beautiful, and the sun, earth, and sparse vegetation intermingle to create stunning pictures. The pale blues, muted yellows, occasional reds, and somber blacks comprise a palette he uses successfully to the point that many followers of David can spot one of his creations simply by the colors and the Yei figures.

Growing up in the Navajo Nation, David was immersed early on by his grandfather in the cultural and religious beliefs and teachings of his clan and his people. He reflects on this body of knowledge often with his Yei subjects, relating how these messengers communicate with the spirit world and with the natural world around us. David is very careful to reveal in his paintings only that which has been approved by his elders for public consumption – many of the private details are carefully modified or altered so that the privacy of the beliefs and teachings are maintained.

Earlier this month, David and his daughter drove from Kayenta to bring three new pieces to the Gallery. We met them for lunch, had a wonderful conversation over a nice meal at one of Santa Fe’s premier local restaurants, and then wished them safe travels as they headed back home. 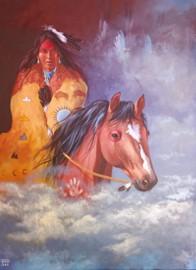 The first piece from that delivery is titled “Out of The Mist” and is a variation of one that David had done previously for a client. It depicts a mounted Navajo warrior coming out of the mist, mounted on a beautiful horse. As this mighty warrior returns home, he is protected by the holy ones represented faintly in the background. The holy people are always there, just not always seen.

The mists gather around the horse and rider as they make their way along their journey. Horses are important to the Navajo, following the introduction of horses to the American Southwest by the Spanish in the 1500’s. Treasured companions, often allowing the riders to traverse much farther and faster than an individual on foot, the horse was rapidly adopted by many Plains Indian tribes as well. Today it is not uncommon for a Navajo living in a remote hogan to have a couple of horses, a few sheep for wool and mutton, and other livestock as part of the ranch.

The second piece is also one that I had asked David to create, similar to one I had purchased from him a few years ago, which is now in a nice home in another State. Titled “Four Sisters Blessing,” it depicts the Yei figures sending messages through the hummingbirds before them. Here the four sisters represent the four seasons and the four directions; everything for the Navajo is represented in fours. The four sisters are blessing the hummingbirds and sending them off to the people with good messages.  The basket of corn meal represents blessings for the people which the little birds are carrying to them.

We often see hummingbirds and blue birds in David’s compositions, as they are swift and careful in their flights and in their relaying messages from the Yei to the Navajo peoples. I love watching the hummingbirds cavort around our back porch in the summer, and this painting draws me into that story as I see the colors in David’s mind and on canvas reflected in the hummingbirds from my back porch.

The third piece does the same for me, with the Yei figures communicating with a blue bird sitting on the basket with corn meal. Again, this is a painting that I asked David to create, and I will have similar mixed feelings of happiness and sadness when it goes to a forever home. This is true of all the Native American pieces of art that we have in our Gallery – we are only the temporary custodians of the works until just the right person comes along who falls in love with them and takes them to their forever home. 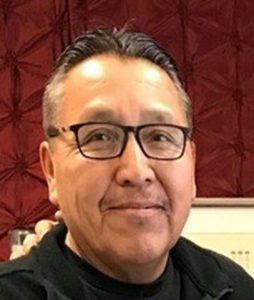 David, being the humble and generous person that he is, happily paints variations of some prior works for me, as well as taking inspiration from your feedback to bring completely new images to life. I never know what will be coming next, but one thing is certain – whatever it is, it will have the distinctive palette and images that help define David K. John as one of the preeminent Navajo artists of today, and I will likely fall in love with it along with many of you. So please continue to give David inspiration and support his artistic excellence. This is how an artist rises to long lasting prominence in the art world, and whose stories reverberate through the ages.

So once again, thank you from both David and myself for your inspiring comments. His exhibition, “The Art of David K. John,” continues on The Dancing Rabbit Gallery website through the end of May, and will be in the Gallery exhibition archives thereafter. If you have not yet visited the exhibition, perhaps put aside a few minutes and give it a look. It will be time well spent.