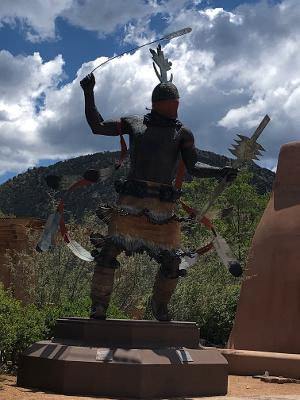 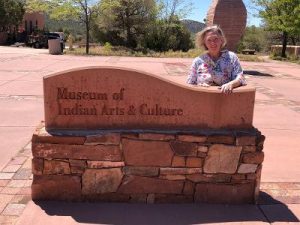 For the past seventeen years, the Museum of Indian Arts and Culture (MIAC) in Santa Fe has hosted an Indian Market called Native Treasures. Each year, they select a prominent Native American artist as a Living Treasure, and honor that person with an individual exhibit. In normal years, a small group of outstanding Native American artists are invited to exhibit and sell their art.

Last year, in the midst of the pandemic shutdown, MIAC decided to host a virtual market. The prominent artist selected to be the Living Treasure was Kathleen Wall. Her stunning pottery and also her significant contributions to her community were the major criteria for her selection. However, because of the pandemic, she was not able to receive the individual exhibition and accolades that she deserved. Therefore, MIAC made a smart and courageous decision to extend Kathleen’s recognition to this year as well.

Even though New Mexico is opening up again as the pandemic subsides, MIAC also made an intelligent choice to have a hybrid Native Treasures event this year. Traditionally held during Memorial Day weekend, the event features ceremonial dances, very tasty Native American food and drink, and a very nice selection of the highest quality Native American art on sale.

For their hybrid 2021 event, MIAC started with an online silent auction for several days prior to the Memorial Day weekend. I really enjoyed looking at the items donated by the artists and bid on a few of them as well. The proceeds went to help MIAC in their mission of education and outreach to Native American artists.

This was followed by a gala dinner for sponsors and supporters of MIAC. As The Dancing Rabbit Gallery has been a sponsor of Native Treasures for several years, we were happy to attend the dinner. We chatted with a number of friends and made new friends as well. Several artists, including prior Living Treasures Joe and Althea Cajero, were in attendance, so we got to hug people we hadn’t seen in over a year because of the quarantine and market shutdowns.

The Museum Hill Café in Santa Fe was the main site of the dinner, though MIAC had arranged for several private dinners to take place on the same Friday night as the main dinner. This was because MIAC held a live auction of eleven stunning pieces of art, donated either by the artists or by galleries and supporters of MIAC. 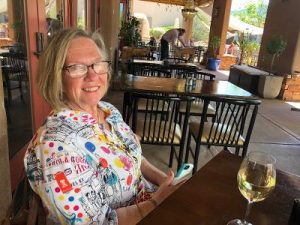 We started the evening with a cocktail and appetizers reception at the Café, and moved to our seats for the auction activities. As each of the private dinners around Santa Fe were tied into the auction via Zoom and Internet bidding, the bidding was lively and quite up-beat in spirit. Everyone knew that the proceeds were heading to a good use, so nice values were recognized by MIAC for the items. Though Michael and I were bidding on several of the items, we managed to win only one, a stunning collaboration necklace that will come to the website in the near future.

The dinner then followed, with a carefully prepared menu with tenderloin and salmon as the entrees, and a quite yummy orange flan with powdered cocoa for dessert.

This was quite the kickoff for the Native Treasures event. An online exhibition began the next morning, running for several days to allow interested individuals to scroll through the extremely well-done catalog of items for sale. The online exhibition proceeds were given to the artists, helping them recoup some of the missed opportunities of being shut down for a whole year.

At the end of the week of festivities, we took a look at the decisions made by the MIAC Board to produce this Native Treasures event and decided to continue our sponsorship of the event next year. MIAC carefully evaluated the different options for running this market, and in each case we think they made very wise and considered decisions. Though not the pageantry and broader scope of pre-pandemic Native Treasures markets, the compromises selected by the MIAC Board were, in our opinion, the best possible for the artists, for the supporters of MIAC, and for MIAC itself. Information was communicated in an open, transparent manner, and was distributed in a very timely manner. As JoAnn Balzer, one of the attendees at the Gala dinner said, “The MIAC staff did an excellent job of pulling this event together, and the high quality of the exhibition catalog is one outstanding reflection of the amount of work and careful thought put into this event.” Well said, JoAnn, well said indeed.