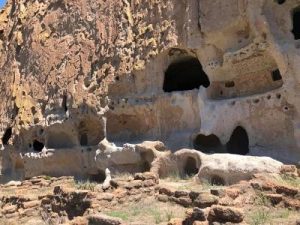 When tourists travel through the Santa Fe area, one stop is often to see the cliff dwellings at Bandelier National Monument. Run by the US Park Service, the cliff dwellings offer striking evidence of human habitation in the area going back over 11,000 years. These dwellings were created by the Ancestral Puebloans, the forefathers of many of the Pueblo communities and Indian tribes around the American Southwest.

Located near Los Alamos, the Bandelier Park covers roughly 45 square miles of parkland. Rugged mesas and deep canyons are lined with huge stands of pine and aspen, though recent climate changes and forest fires have taken their toll on the flora. Herds of elk and deer roam the area, and it is not unusual to see an elk or deer standing near the highway as one drives by. However, these are wild animals, so please do not approach or attempt to feed them. And their price for selfies is really, really high, so try to avoid getting yourself in a picture with a wild animal.

The first cave dwellings were made around 1100 A.D. and the National Park Service has worked to maintain and protect the dwellings from the roughly 200,000 tourists to Bandelier each year. In addition to the dwellings themselves, there are rich troves of petroglyphs depicting the lives of these early inhabitants. There are also many well-constructed masonry walls that are still standing almost a thousand years later.

In roughly 1550, due to a severe and prolonged drought, the Puebloan peoples abandoned the Bandelier cave dwellings and spread throughout the area to form the many pueblo communities. The closest and most directly related pueblos are Cochiti and San Ildefonso, not far from the Bandelier dwelling site. 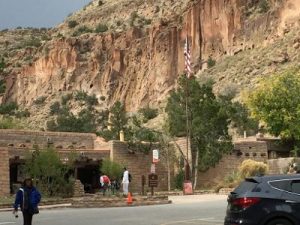 The entire Pajarito mesa area was formed through tectonic plate uplift and volcanic eruptions, so the Puebloan peoples seeking safety from predators carved their dwellings directly from the volcanic tuff of the mesa. They used ladders and easily defensible pathways up to their dwellings, returning in the morning to the valley below to gather food and water and engage in farming activities. Corn was a highly revered crop, and was often utilized in conjunction with various squashes and beans to form the staple of the Puebloan peoples’ diets. Supplemented with various meats from deer and other animals, the Puebloan peoples lived a simple lifestyle in harmony with the surrounding areas.

The valley floors tend to have rain and snow runoff streams, trickling down to the lowest point. The Puebloans used these streams for crop irrigation, practicing careful farming practices. 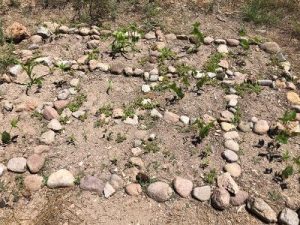 When you visit Bandelier, you will be directed to off-site parking areas with free shuttle service to the actual Visitor Center and park entrance. Handicapped parking is available at the Visitor Center, but parking fills up very quickly in the summer for both handicapped and regular parking, and visitors may be turned away due to lack of parking spots. 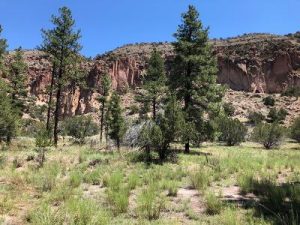 One of my favorite things to do while at Bandelier is just sit on a bench and look up at the cave dwellings, imagining what life was like for the Puebloans. The soft breeze, combined with birds singing their lusty songs, produces a serene, peaceful feeling. The smells of the pine trees and the babbling of the nearby creek complete the scene of a tranquil life led a thousand years ago.

The Puebloans were a peaceful people, living an agrarian life while Mother Earth provided them with the necessary food and water. They constructed sturdy, defensible dwellings that have resisted the ravages of time and weather and still stand proudly today, a testament to their labor and workmanship. When they left the Bandelier area, searching for more fertile land with better water sources, they dispersed to many areas of what is now New Mexico, creating the pueblos that the Spanish Conquistadors soon encountered. But those encounters are another story for another time.

Should you make a trip to New Mexico, plan on stopping at Bandelier early in the morning to see the cliff dwellings. Take a bottle of water with you, and breathe deeply as you wander the valley paths looking up at the cave dwellings. This is a rich part of our history. Enjoy!