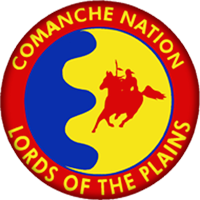 When we look at the world around us, it is often helpful to look back to the past and gain a bit of perspective. Current Federal Census numbers show the once-populous Comanche Nation at about 17,000 members, primarily living in southwestern Oklahoma. The Comanche Nation is headquartered in Lawton, Oklahoma.

The Comanche tribe called themselves “human beings” or “people” in their language. They were first called Comanche by the Spanish conquistadors in about 1706, as the Spanish prepared to attack the outlying Comanche dwellings in southern Colorado. The Spanish adopted the word Comanche as a variation of the Ute term kimantsi, which meant “enemy” in the Ute language.

Prior to the introduction of the horse to North America by the Spanish, the Comanche often used large dogs as pack animals to carry their portable dwellings and goods as they migrated about their territories in search of game. Following the Pueblo Revolt period in 1680, the Comanches rapidly acquired horses and incorporated them into their migratory culture. This was so important to them that they broke away from the Shoshone and moved south into Texas to acquire more horses.

The Comanche began to incorporate rapid strategic movements into their war strategies, and became know as very fierce warriors while fighting on horseback. This led to the inevitable stereotyping by Hollywood of bands of Indians circling the wagon trains. Typically, the Comanche liked to raid at night, and the use of the moonlight led to the creation of the term “Comanche moon” to warn settlers of the risk. As the Comanche moved into the southern Great Plains territories, through battles they displaced the Jicarilla Apache, the Mescalero Apache, and the Lipan Apache tribes.

At one time or another, the Comanche fought against almost all neighboring tribes and neighboring settler groups, aggressively defending what they perceived to be their homeland, Comancheria. After the formation of the Republic of Texas in 1836, the new Texas nation entered into formal negotiations with the Comanche Nation to define territorial boundaries, but Texas Republic President Sam Houston was unable to persuade the Texas legislature to agree to the treaty.

In the mid-1800s, waves of European diseases such as measles, cholera, and smallpox ravaged the Comanche population, dropping their numbers from an estimated 20,000 to almost extinction by the latter part of the nineteenth century.

Reflecting the American expansion into the Midwest and western parts of North America, President Andrew Jackson passed the infamous Indian Removal Act of 1830, allowing the Federal government to forcibly remove Native Americans from their lands and into reservations. This led to many horrific events, such as the forcible move of the Cherokee from the southeast part of the United States to Oklahoma, knows as the Trail of Tears. Roughly 4,000 Cherokee died during this forced march in the middle of the winter of 1838. It is estimated that over 100,000 Native Americans were forcibly relocated to reservations during the second half of the nineteenth century.

For many reasons, some humanitarian and some avaricious, the United States government began to move the Comanche into federal reservations following the 1867 Treaty of Medicine Lodge. One staple of the Comanche life was hunting from the vast buffalo herds of the Southern Plains, and the Treaty promised to allow the Comanche to continue to hunt while also stopping the slaughter and decimation of these herds by American buffalo hunters. This promise, among many others, never reached any degree of fulfillment and the buffalo herds almost became extinct. 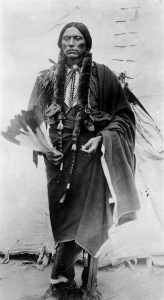 Rather than go quietly into the night, the proud Comanche decided to resist and survive. In 1874 they attacked a band of buffalo hunters in the Texas Panhandle in a disastrous battle known as the Second Battle of Adobe Walls. The US Army engaged in a decade long Red River War with the Comanche. Finally, in 1875, the last band of Comanche led by Quanah Parker, surrendered and moved to Fort Sill. Oklahoma. In 1890, the official US Census showed only 1,598 Comanche at Fort Sill.

In 1817, the Cherokee were recognized as citizens of the United States, followed by all other Native Americans at the end of the Civil War. The theory of citizenship did not fully emerge for almost a century, however.

In 1919, the Federal government finally granted full United States citizenship to all Native Americans who had served in the military during World War I, estimated at about 10,000. Even then, Native Americans continued to face stereotypical racism from their neighbors.

This citizenship continued to be expanded by President Calvin Coolidge in 1924 with the Indian Citizenship Act. By then, roughly two-thirds of Native Americans were already citizens through military service, inter-marriage, or through receiving Federal land allotments.

In 1990, President H.W. Bush signed a proclamation declaring each November as National American Indian Heritage Month, recognizing the need to preserve and celebrate the vibrant culture of Native American tribes that aggressive European expansion almost eliminated. In many cases, entire tribes were eliminated, along with their language, culture, and history.

We cannot change the past. We cannot erase the atrocities committed by European settlers as they populated North America and shoved the resident Native Americans out of the way. We can, however, reflect on this horrific episode in the almost 250-year history of the United States and take lessons from it. All people have value. All people, regardless of their ancestry, cultural values, beliefs, or origin are important. This gives us the amazing, vibrant tapestry of our county. We can celebrate our diversity, and we can learn from each other.