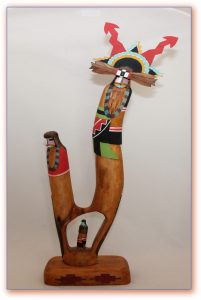 When we think of sculptures, particularly public works of art, we immediately think of large, imposing pieces of stone, metal, or wood. These are meant for public display, and are meant to convey messages or stories about the subject at hand.

However, for the most part, these large sculptures don’t fit in our homes, so the world of sculptors has produced sculptures in all different types of media meant for office or home display. Successful bronze sculptors like Remington have their sculptures everywhere. That is because they often authorize dozens if not hundreds of each work in various sizes, because the artistic work has been completed with the creation of the mold.

Other mediums, like stone and wood, tend to produce individual sculptural creations, as there is no mold for easy replication of the sculpture. Stone, in particular, attracts me because there is no recourse once a chisel cuts into a stone. The sculptor can’t just glue it back on. Each cut, each laborious layer of sanding, each detail becomes excruciatingly important for the artist.

That detail is one of the aspects that originally attracted me to Zuni fetishes and carvings. These small sculptures started out, hundreds of years ago, as found stones that resembled (to the imaginative eye) a forest creature. These stones were treasured as they were believed to possess the spirits of those forest creatures, and would somehow bestow the characteristics of that creature to the holder of the stone. For example, badgers are aggressive and territorial, so those characteristics would flow into the holder of the stone. 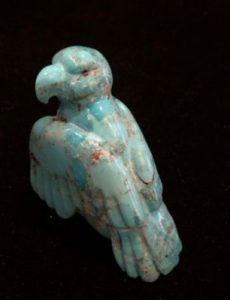 But Native American artists were not satisfied with just the stones created by Mother Earth. They began to shape the stones, bringing out more detail and character to their carvings. Some stones, like turquoise, were softer and easier to carve than others. Wood possessed much of the same softness, so it also became a favorite medium for Native American carvers.

As tools evolved, so did the elegance and fine detail of the carvings. Different stones were inserted for eyes, or as elements of maidens clothing. Combinations of stones were included as part of the prayer bundles often affixed to the backs of the creatures. These enhanced carvings were still carried in small pouches or pockets by many Native Americans as were the original found stones.

As with all artists, Native American artists began to innovate and experiment with their carvings. Many went to Europe and Asia to study with great masters, and to learn the techniques and lessons that aided the creativity within the soul of the artist. They learned how to separate the unneeded stone from the sculptural form they were creating, finding the object they sought within the raw stone.

Other sculptors began the cutting and mosaic additions of smaller stones, often of different types and colors, to create the forms that they imagined.

And yet other sculptors looked at the materials they had around their homes and began to create imaginative sculptures with mediums like shell, deer antler, and even combinations of these mediums with other materials.

The size and complexity of these small fetishes grew rapidly, as stone sculptors learned to take large pieces of granite, sandstone, and other stones and extract from these stones the vision that they had. Cliff Fragua of Jemez Pueblo in 2005 created a large 7-foot-tall marble sculpture of Po’pay, the Native American leader who began the 1680 Pueblo Rebellion. This inspirational sculpture stands in Emancipation Hall in the US Capitol Building Visitor Center in Washington D.C. 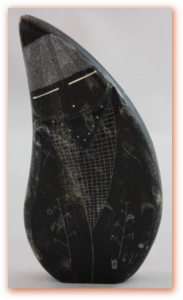 Other sculptors, such as Todd Westika and Jeff Shetima, both of Zuni Pueblo, have taken their small fetishes and turned them into larger scale works of sculpture. Todd, for example, recently took a buffalo horn and added inlay to the horn and created a sculptural work that stands 5 inches tall. He also gathered Orthoceras fossil stones (containing the fossilized remains of creatures from millions of years ago) and carved them into beautiful corn maidens. These maidens represent a fundamental aspect of Native American culture, as they are the ones who bless and aid the vitally important corn crop.

Jeff Shetima, who has been carving stone fetishes for many years, expanded with a striking mother of pearl dragonfly, sitting atop a set of sterling silver cattails, anchored to a chunk of cuprite to resemble Mother Earth. This stunning 5-inch-tall sculpture embodies the multi-media approach of assembling materials that belong in the vision, not trying to force one particular medium to satisfy all aspects of the creation. As a talented stone sculptor who favors Picasso marble, Jeff also created a highly detailed and very life-like bear, adding inlay of coral, jet, turquoise and mother of pearl to the almost 5-inch-tall figure. 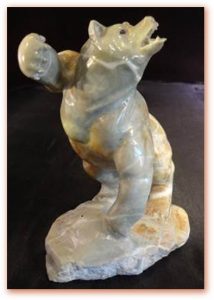 Art continues to evolve. As sculptors learn ways to express their visions, they produce increasingly interesting pieces of art. Seeing their expressions of vision is inspirational to me, and I eagerly await the next items that come from their souls.

When I am fortunate enough to have these sculptures arrive at my Gallery, I am spiritually elevated as I gaze upon them. It is bittersweet, as I know that somewhere, someone is seeking to bring this sculpture into their home or office, and my enjoyment of the sculpture in my Gallery is only temporary.