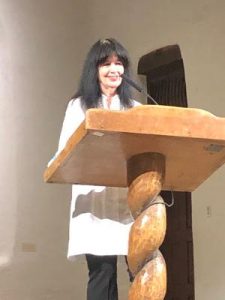 In March, we had the opportunity to attend a presentation by Joy Harjo, the first Native American Poet Laureate. The presentation was offered by the New Mexico Museum of Art on a lovely Wednesday evening at the Museum’s historic Saint Francis Auditorium.

We both love poetry, and were quite intrigued by the opportunity to hear an actual Poet Laureate discuss her works. Right after getting our tickets for the event, we did some quick discovery on both what a Poet Laureate is and who Joy Harjo is.

The first part of our investigation was fairly easy. Started in 1936, a United States Poet Laureate is selected by the head of the Library of Congress to represent and promote poetry throughout the United States. This position nominally lasts for one year, though many have been appointed to a second term to see the completion of projects that they may have underway.  Only Robert Pinsky and Joy Harjo have been given a third consecutive term as Poet Laureate. Pinsky was asked to retain the position for a third term because of the United States Bicentennial celebrations, and Harjo has extensive projects underway during a difficult pandemic.

Due to the success of this highly visible national position, many individual States have also appointed State Poet Laureates (in 2020 New Mexico recently became the 46th State to do so) and even some cities like Santa Fe have established City Poet Laureate positions.

The second part of our investigation was a bit more complex. The basic facts are straightforward – Joy Harjo is the first Native American to hold the position of United States Poet Laureate, a Muscogee Creek who attended the Institute of American Indian Arts (IAIA) in Santa Fe as a high school student, a graduate of The University of New Mexico and a holder of a Masters of Fine Arts from the University of Iowa, a mother, grandmother, and great-grandmother, a very talented saxophone and flute player, and an activist for both feminist and Native American rights. But as is always the case, understanding the person behind the resume is far, far more challenging. 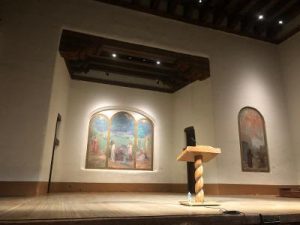 Following a nice introduction by the Museum of New Mexico, Joy came onto the stage and began her presentation. We thought we might get a brief poetry reading, but were we pleasantly surprised! Joy started with a brief discussion of her United States Poet Laureate position and duties, and gave us a nice overview of where she wanted to take the evening’s discussion.

We were all quite pleased when Joy started with a lovely tune on her wooden flute, throwing bright rays of sunshine, butterflies, and the scent of morning dew scampering through our imaginations.

Joy read a few passages from her latest memoir, Poet Warrior, and also a few small parts of her latest book of poetry, An American Sunrise. Throughout the readings, she imbued the words with depth of emotion, giving her words strength and passion. As she read, she became the poem and lifted the audience to thrilling heights and insights about her culture and her life. Her voice had an inner strength and commanded the attention of the audience. We didn’t dare even breathe while she was reading her poems, for fear of making a slight noise or missing a key word or phrase.

Joy’s poetry is much more than just pretty words strung together. It reveals a depth of pain going back to the Muscogee Creek journey along the Trail of Tears in the 1830’s, abandoning their Southeastern Woodlands home in Tennessee, Georgia, and Mississippi to be forced into Oklahoma reservations. Many died during this tragic episode, and many more were forever uprooted and separated from their ancestral homelands. The Muscogee Creek are known as one of the “Five Civilized Tribes,” and their story is beautifully told in the Five Civilized Tribes museum in Muskogee, Oklahoma. The five civilized tribes include the Cherokee, Choctaw, Chickasaw, Seminole, and Muscogee.

The Mississippian culture from which the Muscogee Creek emerged over a thousand years ago was a civilized, mound-building, peaceful society. They traded extensively with their neighbors, and established a thriving agriculturally-based series of communities. Archaeologists have traced the roots of these peoples back to the Paleo-Indians who first settled the area over 12,000 years ago.

Joy also traces the recent abuses to her peoples in her poetry, though it is more of a sense of resigned acceptance of past atrocities and a sense of current and future dignity than what many others write. Her hope for the future is bright and welcoming, looking to the abundance found around us and to the possibility of a better life for her grandchildren.

There is a very evident strain of philosophy in Joy’s work, accompanied by a belief in equality and justice for not only her people, but for everyone. As an early feminist and Native American rights activist, Joy’s inner angst comes from a place of experience, and her voice clearly expresses these many lessons.

I agree with Joy, and look forward to reading more of her almost two dozen books of poetry, memoirs, and anthologies of other Native American poets. We cannot change the past, nor should we ever forget the past. We live in the present and plan for the future, and that present and future can and should be equally prosperous for everyone. Basic human rights apply to all humans, regardless of cultural origin. We should all be allowed the same dignity as human beings and afforded the same respect. Voices of strength, like Joy Harjo’s, are beacons and guideposts for us to improve our society. Those voices of strength should continue to be heard.