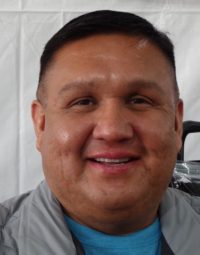 It is with a very, very heavy heart that I write this special edition of the Newsletter.

A wonderful man, and an incredibly talented jeweler, Albert Lee, has passed away.

Albert was born in 1980, making him a very young 41 years old. He passed away on the evening of April 12 in his hometown of Farmington, NM at a park where he often went to relax, meditate, and enjoy the splendid scenery.

I will always remember Albert as someone who cared deeply about those around him. He often met me with a huge smile and a big hug at art markets, and I always made a specific point of knowing where his booth was and making a beeline there when the market opened. Usually he was accompanied by his mother Velma, a constant source of assistance and support for Albert. Generally we focused on how we were doing since the last time we had chatted, and Albert was all too eager to show me the lovely jewelry he had made since then.

One of the most humble people I know, Albert tended to downplay his amazing talents. I, on the other hand, am very willing to discuss them. He had several generations of teaching behind him, particularly the skills and tools from his father, Alfred. Albert was an exacting technician when it came to both silversmithing and stone placement, and his bezels were always perfectly centered, aligned, and sized. The stones he selected were of the highest quality he could acquire, and he and his older brother Chuck carefully cut them to present the most amazing colors possible. When mounted on the heavy silver base, the stones took on a life of their own, and I sighed audibly when he showed me his newest works.

And let it be known that I am not the only one who sighed at the beauty of his works. Albert has a large, dedicated following of galleries, collectors, and even notables (discriminating jewelry wearers) such as former First Lady Laura Bush and her daughter Jenna Bush Hager.

Many years ago, Michael and I were going through the Navajo Nation to pick up some orders we had placed with different Navajo artists. As part of our journey, we stopped in Farmington to see Albert. We invited Albert and Chuck to join us for lunch, as we would be arriving around 1o in the morning. When we arrived, Albert and Chuck had set a huge spread of fruits, pastries, and other assorted goodies “to tide us over until lunch.” So typical of Albert and his big, loving heart. Yes, we did indulge, and yes, we did acquire some lovely pieces of jewelry that he had just finished, and then we went to lunch with Albert, Chuck, and his parents.

While we were visiting Albert in his home, he delighted in showing us some of the museum-quality works of Native American art that he had collected over the years. Albert was very proud of his Navajo heritage, but also a strong supporter of Native American artists and their expressions of their culture in general. His excellent eye for detail was obvious, and I do not hesitate to believe that he would have been an outstanding judge at the highest level of juried competitions. Of course, Albert would likely have a built-in conflict of interest if he judged jewelry, if any of his magnificent pieces were entered. But knowing Albert, his integrity and humble nature would award the ribbons to other deserving artists. He was just that way.

Earlier this month, I had a large “surprise” birthday party at our home in Santa Fe, and Michael invited our neighbors, local friends, and nearby Native American artists to join us in this party. To our great pleasure, Albert and Chuck drove down from Farmington the night before and came over to the party. Albert told me of their travel plans, and of course I asked them to stop by early so we could have a visit before the other 70 or so guests arrived. They agreed, and we had several wonderful hours to chat in our living room.

So this is a very sad time for me. A giant has fallen. His time here with us on Mother Earth ended all too soon. In passing, Albert follows his older brother Vince, and he is survived by his parents Alfred and Velma, and his older brother Chuck, and many related family members. It is a very sad time for them as well, and I ask that you keep them all in your prayers. We will say our farewells to Albert on Saturday at his services in Farmington and celebrate his life. And I will miss him so.

We are all diminished by the loss of Albert, and I grieve that I will no longer see his smiling face except in my pictures and memories. In my memory, I see Albert’s huge smile, his warm hug, and his radiant personality. That is how I will always see him. A giant has fallen, and a dear friend is no longer with me.