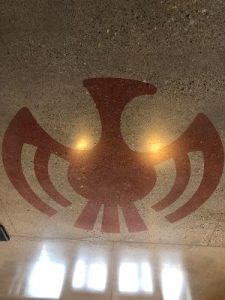 The Institute for American Indian Arts (IAIA) is currently celebrating its 60th birthday, and the companion museum is concurrently celebrating its 50th birthday. IAIA started in 1962 on the grounds of the Santa Fe Indian School as an undergraduate program for Native American students interested in the arts. Today, IAIA occupies a state-of-the-art campus on 140 acres to the south of Santa Fe, with inspiring views of the Sangre de Cristo and Jemez mountain ranges that border the east and west of Santa Fe County.

In 1986, IAIA had a significant milestone in its history when the US Congress made them one of only three Congressionally-chartered schools in the US. The focus of IAIA is American Indian and Alaska Native arts and culture, and their accredited degree programs revolve around this focus.

IAIA offers a broad spectrum of creative art fields for students, starting with often overlooked ones in museum studies and Native American art history. They have vibrant undergraduate programs in performing arts, cinematic arts, creative writing, and (my favorite) studio arts. Creative Writing and Studio Arts have graduate degrees offered as well. Michael’s favorite courses, as he is a retired businessperson and retired University professor, are found in the business and entrepreneurship offerings within one of their majors, so students can be both successful as artists and successful as small business owners.

Earlier this month, we had the opportunity to visit IAIA during one of their visiting Artist-in-Residence programs. IAIA brings in these world class Native American artists from various fields, and they get to work with their own creations in large, well-equipped studios, as well as work with students eager to learn at the feet of the masters. One of our friends, Cliff Fragua, was asked to be an Artist-in-Residence for two months, and IAIA arranged for a reception and tour of the studio spaces open to the general public.

We gleefully piled in the car and headed to IAIA for the reception, where we had a chance to mingle with a number of IAIA faculty and students while eating a catered dinner. We were both impressed at the quality of faculty – many with terminal degrees – and the eager, cheerful students. Following the dinner, we headed down to the stone sculpture studio to chat with Cliff. 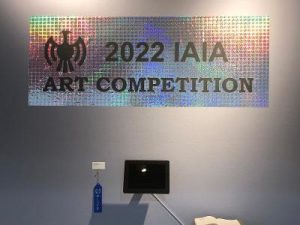 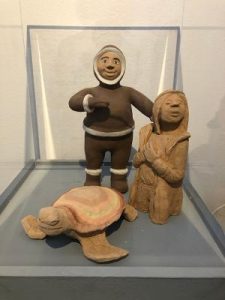 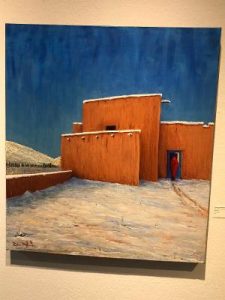 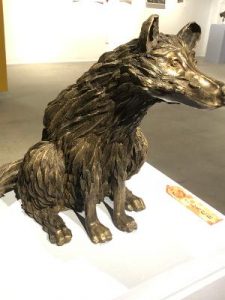 Along the walk to the studio spaces, we came across an exhibition of student art. Wandering about for a few minutes, we were amazed at the skill and attention to quality of these students. Yes, there were quite a few ribbons and we debated between ourselves which ones we liked the best, but the overall impression of the exhibition was “wow!” 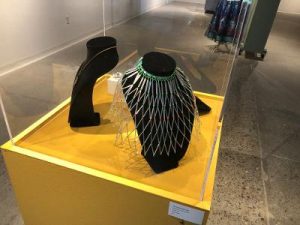 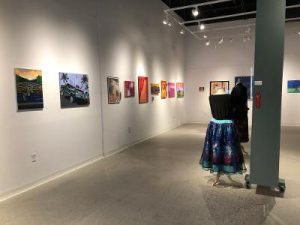 Cliff’s studio space at IAIA is part classroom with work tables and the ability to work with small groups of students and part stone sculpting tools.

Cliff brought to IAIA a roughly four-foot-tall marble maiden that he had been working on for a number of years, a start-and-stop project as his time permitted. The marble was from the same large piece of Tennessee marble from which he created the dynamic Po’Pay statue that stand in the National Statuary Hall of the US Congress. 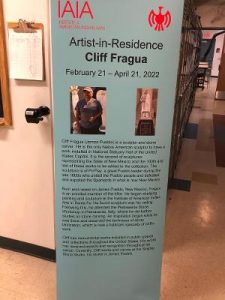 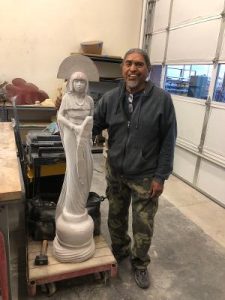 A consummate perfectionist, Cliff has worried over the expression of the maiden, the accurate portrayal of her arms and torso proportions, and how he can bring his vision to life.

We sat and chatted with Cliff for quite a while, as other people wandered into the studio and listened to the conversations. Often a spirited exchange would take place with several visitors, and everyone was truly blessed to get this intimate discussion from Cliff.

Cliff showed us some of the tools he uses to sculpt stone. Individual stone pieces, like the Po’Pay statue, come from massive blocks of stone. Cliff told us about having the stone from which Po’Pay was sculpted delivered by a large flat-bed truck to his studio in Jemez Pueblo, where he had to erect a sturdy A-frame to work on the stone. Even a “small” piece like his four-foot maiden can be several hundred pounds or more. As many sculptors did in the past, Cliff started with large and small chisels to take away the “non-subject” pieces of rock, leaving only the sculpture that was intended. He moved to larger diamond-tipped carbide blades for his saws, making the initial removal much more straight-forward. 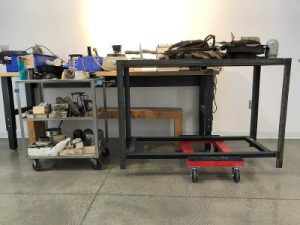 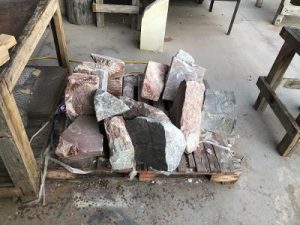 Once the figure is roughed out, Cliff then begins the delicate process of creating the art within the rock. He talked about using a small star-point chisel to carefully extract very small pencil eraser size parts of the rock, and the extensive sanding and smoothing that takes place as well.

Our time at IAIA for this reception was all too soon over, so we thanked Cliff and departed homeward. This won’t be our last visit to IAIA, however, as they continually present both the works of their students and the receptions of visiting Artists-in-Residence to keep the general public engaged.

On this sixtieth birthday of IAIA, we celebrate not only the Institute and its focus on maintaining Native American arts and culture, but also the talented students and dedicated faculty that are the lifeblood of emerging Native American artists. Knowing that these students are learning and polishing their artistic talents and are ready to assume their position as the next generation of cultural messengers is both comforting and inspiring. IAIA, Happy Birthday, and here’s to many more to come!