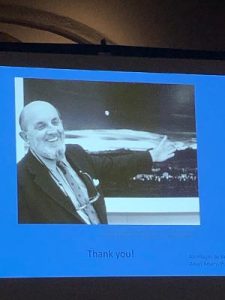 A young boy by the name of Ansel Adams was able to experience some of this early in his life, when his parents took him on a trip to Yosemite Valley in California. He immediately fell in love with the valley, and spent his entire life capturing the American Southwest in general, and the Yosemite Valley area in particular, on film. Often regarded as one of the greatest American photographers, his extensive portfolio of still images is a rich testament to this geographic beauty.

In March, the New Mexico Museum of Art sponsored a talk by Dr. Rebecca Senf, the chief curator of the Center for Creative Photography, University of Arizona – Tucson. Rebecca has spent her academic career focused on the works of Ansel Adams, and she gave a wonderful talk discussing the life and contributions of Ansel Adams.

The major elements of what Rebecca discussed were already known to us, as Michael is a huge fan of Ansel Adams and we have two of Adams’ large Yosemite prints in one of our hallways at the house. Michael has visited the Ansel Adams Gallery in Yosemite Valley a number of times over the past fifty years to admire the collected works of Adams. Our next trip might involve a stop at the Tucson Center to see even more of Adams’ works. 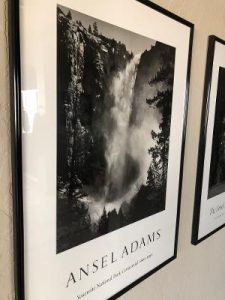 Ansel Adams was born in San Francisco, so a family vacation to relatively nearby Yosemite Valley in the early twentieth century would not be particularly unusual. An only child, Adams was encouraged by his parents to pursue music, which he did with the piano, and subsequently encouraged to pursue photography, using an original Kodak No. 1 Box Brownie. Ansel visited Yosemite Valley for the first time in 1916 at the age of 14, using his rudimentary camera to capture a number of images that are on exhibit at The University of Arizona – Tucson to this very day. He fell in love with Yosemite Valley that summer, and would return each year to the valley until his death in 1984.

There are many photographs of Ansel Adams going about his work in the American Southwest. Often, all of his camera equipment, tripods, and glass photographic slides are shown strapped to a donkey, the transportation of choice in the rugged terrain he was photographing. Instead of using timed exposure film, he continued to use heavier glass slides throughout his career because he felt he could control the exposures, shadows, and depth of field with more precision.

What stands out almost immediately when one views an Ansel Adams photograph is the interpretation that Adams gives to the scene. His selection of perspective – where to stand to view an entire mountain range, or to view a valley scene, or to view a grove of trees – contributes to an energy level of the scene that, when combined with his manipulation of photographic variables, leads to a dynamic presentation of a scene that most people would not perceive. 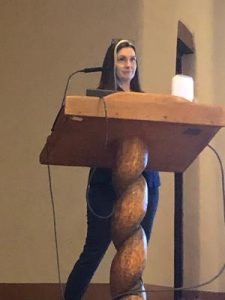 In one famous story related by Dr. Senf, Adams and his small group trekked up the trails to a specific spot in Yosemite Valley, where Adams wanted to capture the energy of Half Dome, a monstrous chunk of stone regally raised above the valley floor. While making the trip, Adams continued to find interesting scenes to photograph, rapidly diminishing his supply of glass photographic slides. When he arrived at the plateau from which he wanted to take the ultimate Half Dome photograph, he had only a handful of slides remaining. He tried several combinations, but knew that he didn’t have exactly the right mix of variables to produce the image he wanted. Down to his last slide, he carefully thought through all the variables, and as the light began to fade, he took the shot. It was magnificent, and through his clever use of exposure and filters, became an iconic image of Half Dome – one that nobody will see in real life, as the colors in Adams’ shot were created by Adams just for the photo.

Throughout his life, Adams demonstrated why his use of photography was more than just a true-to-life recording of a scene. He used his artistic skills to transform scenes with a consistent flair for drama and energy. As Dr. Senf mentioned in her discussion, “The photographs of Ansel Adams are immediately recognizable by anyone who knows his work. They may not have seen the specific photograph in question, but his style is very evident.” Much like we recognize the styles of famous oil painters, we can also recognize the dynamic images of Ansel Adams.

After the talk, Dr. Senf remained for questions from the audience. She later moved into the lobby where she chatted with attendees and signed copies of her new book, Making a Photographer – The Early Work of Ansel Adams. Michael, of course, enthusiastically took advantage of this and received a wonderfully inscribed message in his book, which will rapidly join his collection of treasured tomes.

Many thanks to the New Mexico Museum of Art for sponsoring this talk by Dr. Senf. This lecture, and the many more offered by the Museum, adds depth to the wonderful experience of living in and traveling about the American Southwest. Never again will I look at a beautiful sunrise, a stunning mountain valley, or a babbling river without thinking of how Ansel Adams could have transformed that image to something even more spectacular. Yes, it definitely helps to have the awesome raw materials of Mother Nature with which to work, but the touch of an artist helps to bring out emotions and energies that otherwise might be unseen.