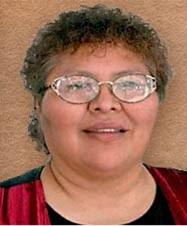 Lorraine Williams is a creative and talented Navajo potter from the Four Corners area on the Navajo reservation. She was born in Arizona during the late 1950s, was not raised with the tradition of pottery making; she did not begin working with clay until her adulthood. Today, her immense tribal pots and colorful Indian icons have made Navajo pots more commercially viable than ever before.

Lorraine was raised in Sweetwater, Arizona (near Kayenta and Teec Nos Pas), on a red mesa near Four Corners. Her Navajo maiden name was Yazzie, which Lorraine says is one of the names the Anglos gave out years ago. Her grandfather was one of the few rangers at Mesa Verde. Her father was a medicine man, and her mother was an herbalist. Three of Lorraine’s seventeen brothers and sisters also work in clay.

Lorraine Williams was given the name Tsi (daughter) by her father, a Navajo medicine man, and her mother, an herbalist. She didn’t begin working in clay until her marriage to George Williams, son of the famous Navajo ceramist, Rose Williams.  Lorraine was inspired by her mother-in-law and would watch her make pottery, while “pretending that I wasn’t,” and then go home and try it herself. For good luck, Williams used to travel fifty miles to her hometown in Navajo Nation, Arizona, to fire her pots in an open pit; today, she burns cedar bark in a neighbor’s fireplace to create the same effects.  Lorraine has been influenced in her pottery development by her sisters-in-law, Alice Cling, Sue Williams, and Susie Williams Crank. Lorraine’s traditional Navajo pots are extremely well thought out and innovative.

Lorraine was one of the female artists featured in the national exhibit and published in the book Pottery by American Indian Women: The Legacy of Generations by Susan Peterson. She was also invited to the Smithsonian Institution in Washington, D.C. to demonstrate traditional pottery making. She has been an award winner at Heard Museum Indian Shows as well as Santa Fe Indian Market.