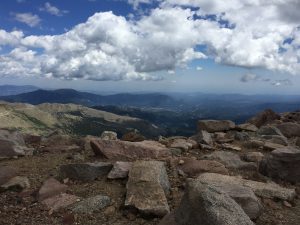 In June, a new Federal holiday was celebrated – Juneteenth. This was in remembrance of the freeing of slaves following the conclusion of the Civil War. There were numerous stories told in the news, as descendants of these enslaved peoples recalled the horrible conditions that existed prior to the Civil War.

That brought to mind – for me, at least – the very similar and equally tragic stories of other peoples who went through these terrors. Sadly, the terrors were also right here in the United States.

Many different ethnic groups migrated to the United States over the past several hundred years. Many were placed into indentured servitude – one small step above outright slavery – and entire families grew up in those conditions. They were the Chinese, the Scots, the Italians, the Irish, and so forth. But that is not what really came to mind when I thought of Juneteenth.

I immediately thought of the residents of this continent before the European incursions. Native American peoples had lived in North America for over 15,000 years. When the European explorers arrived, they unfortunately brought viruses and diseases for which the Native American populations had no protection. Entire tribes were wiped away. It was unintentional genocide, but catastrophic nonetheless.

As the European immigrants settled into the New World, they began expanding from the East Coast of North America further into the continent. In doing so, they often displaced the existing residents from their lands. Many treaties were signed, giving the Native American tribes “rights” to their own land, and “protecting” them from further degradations of their living conditions. One example of this, near and dear to my heart as this is roughly where my family settled, is the Treaty of Dancing Rabbit Creek, signed in 1830 between the US Government and the Choctaw tribe. In that treaty, the Choctaw relinquished roughly 11 million acres of fertile Mississippi land in exchange for roughly 15 million acres of far less desirable what would later become Oklahoma land.

This was the very first treaty signed under the Indian Relocation Act, a Federal law giving the US Government the authority to move Native Americans from their ancestral lands to lands further away from their home. Roughly 15,000 Choctaw walked to their new territory, suffering one of the worst blizzards of the winter of 1830-31 and a devastating cholera epidemic in 1832. Almost twenty percent of these men, women, and children died during this forced migration. The Choctaw, one of the Five Civilized Tribes, were the first to be forced out, followed quickly by the Cherokee, Muscogee Creek, Seminole, and Chickasaw.

These forced migrations were later named the “Trail of Tears” as the travel conditions were cruel and the Native Americans arrived to find no shelters, no food, and almost no ability to survive. The Choctaw did survive, rebuilding a community that lasted until Oklahoma was opened to white settlement in the “Land Rush” in the 1880’s and later when Oklahoma was admitted to Statehood in 1907. During that period, the Choctaw were stripped of much of their land, forced into smaller and less desirable lands, and eventually even stripped of their own governmental structures so that Oklahoma could gain statehood. 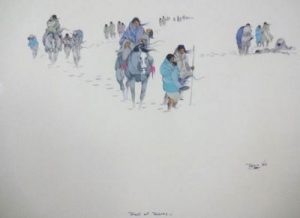 A strong example that comes to mind here in the American Southwest is the imprisonment and forced relocation of the Navajo and Mescalero Apache peoples from around Arizona and New Mexico to a horrid encampment at Bosque Redondo in southeastern New Mexico. Another “Trail of Tears” took place in the 1860’s. While Bosque Redondo, known to the Navajo as “the place of suffering” is the most familiar, there were numerous forced marches of tribes to locations such as Fort Wingate, Fort Defiance, Fort Sumter, and others. These marches were always on foot, without food or drink, and lasted for hundreds of miles through extremely rigorous terrain. Stories were told of young children drowning in river crossings, of parents starving to death so their children could have another few bites of food, of disease and injuries, of torture, rape, and abuse by the soldiers, and horrid deaths.

The Bosque Redondo Memorial just opened an exhibit at Fort Sumner to remember the tragic conditions suffered by the Native Americans forced on this and many other cruel relocations. The exhibit calls the trials of the Navajo, Mescalero Apache, and other tribes a testament to their resiliency. From the perspective of the survivors, it definitely is a testament.

The atrocities of the past make me angry – so angry that we could do those things to others. This has gone on as long as we have been on this earth. Lest we forget, Native Americans often had slaves from other tribes. African-Americans had slaves from other African tribes here in the United States. Even today, we hear many stories of women being abducted here in the United States and elsewhere for the sex slave trade. In any form, slavery is abhorrent, and we need to acknowledge this and prevent its reoccurrence. My husband always says, “Learn from the past, live in the present, and plan for the future.” We need to learn from the past – not continue to live in the past or try to profit from the tragedies of our ancestors. We cannot change what happened in the past. But we can change today and tomorrow.

I am greatly saddened when I go to a place like Bosque Redondo, as I can see the blood and tears of innocent peoples on the ground. I pray that we have learned something from our cruel past, which stretches back to when the first aboriginal man used a club on another aboriginal man. I pray that what we see in today’s senseless violence of mass shootings, unchecked crime, bigotry, and hatred can be overcome so we can all live in happiness together. I pray that we can grow together as one people, celebrating the cultural differences that we all have, yet moving together toward harmony and kindness. It is our choice.