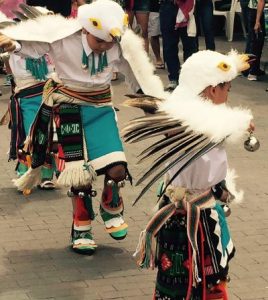 Dance is something that comes naturally to almost all of us – the swaying to rhythms and synchronizing with the music. But fundamentally, dance is a much deeper element of our lives. It is a mechanism to communicate stories and cultural values.

Some current Native American dances are open to non-tribe members and others are restricted to only tribe members for religious reasons. It is always important to ask in advance and make sure you are not intruding on a private ceremony. 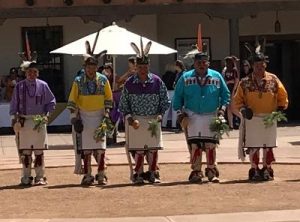 We often see brief “tourist-oriented” dances at Indian markets, at gala dinners, at museum openings, and similar venues. These are often colorful, active, and a condensed version of the actual dance.  For the casual tourist, they are quite interesting to watch. The Indian Pueblo Cultural Center in Albuquerque has a number of weekend dances in which explanations are given to the tourists ringing the outside dance area.

Typically, feast days and religious holidays involve dances. The different clans in a tribe or pueblo often have their own specific regalia and tell stories about their clan through dance.

One of the first dances I saw was on a pueblo roof at Zuni Pueblo many years ago. We stayed at the fabulous Inn at Halona, a small B&B right in the middle of the pueblo (highly recommended by me) and one of our Zuni sculptor friends asked us if we wanted to go to the dance later that evening. Of course we agreed, and when the sun went down, we headed to the middle portion of the pueblo and took the dirt path up to the rooftop. In the plaza below, we saw the tribal elders sitting in their folding chairs in a ring around the plaza, and the dancers in the center. Our friend strongly suggested we not approach the kiva ladder and opening down into the kiva, as that was where the dancers were preparing for the dance. He then explained a little of each dance, and told us that the dances would likely continue all night long. With those simple instructions, we immediately became consumed with the music, the dances, and the stories that were told. Though neither of us speak more than a few words of the Zuni language, the communication was strongly evident in the dance moves, the regalia, and the progression of dancers. 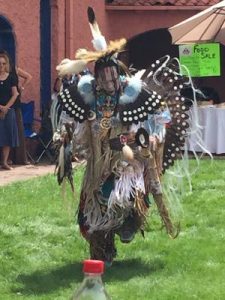 Another time, we were up at Santa Clara Pueblo for one of their summer feast days. This time, we came early with folding chairs, hats, and lots of water. There are several major plazas at Santa Clara, and the dancers from each clan would come to a plaza, complete their dance, and then move to the next plaza to do it again. After five or six clans had rotated through the plaza where we were sitting, we noticed the first dance group returning. They continued all day long, progressing from plaza to plaza.

We had been invited to “grandma’s house” as part of the feast by one of our Santa Clara potter friends. It turns out that every house in Santa Clara pueblo is “grandma’s house” and tend to have no street signs or house numbers. But we managed to find the correct “grandma’s house” with friendly assistance from the Santa Clara residents, and went in to have a bite to eat with grandma’s family. When we got to the house, we both realized that in this case, grandma was Margaret Tafoya, and we both looked at each other with wide eyes, wondering if we should set foot in the house where this incredible matriarch grew up and made her pottery. We finally got enough courage to go in, and we were immediately warmly welcomed to the home by her family. Sitting and chatting with the Tafoya family members was another of those experiences we will never forget. 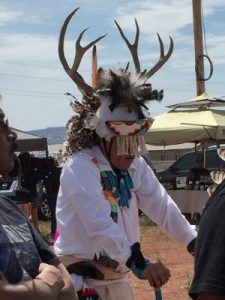 A few years ago, we were back out at Zuni Pueblo for their Mainstreet festival, which is very reminiscent to a Southwestern pow-wow. Lots of artists showing their talents – of course we managed to purchase a few pieces of art. There was also a huge main tent for the dances. I enjoyed the buffalo dance and the deer dance, as some of the dancers had authentic, harvested headdresses as part of their regalia and the hunters and pueblo maidens had elaborate regalia to tell their part of the stories.

Quite a few years ago, Michael and I went to the Five Civilized Tribes pow-wow at the Standing Bear Park in Ponca City (northern Oklahoma), and they had an amazing Grand Entry dance and dance competitions throughout the weekend. The drummers sat under a tent in the center of the dance area, and the dancers proceeded to demonstrate their talents. In years long ago, the multi-tribe pow-wows were an excellent mechanism for young people to meet someone from a neighboring tribe. It also fostered cooperation and good will between the tribes.

The Chicasaw Nation formed the Chicasaw Nation Dance Troup in 1992 to help preserve their cultural stories. We thought that sounded interesting, so we investigated further. At the Chickasaw Nation Cultural Center and museum near Sulphur, Oklahoma, we had an opportunity to watch several dances, and then the big surprise – they invited the audience to participate in a friendship dance. Of course, I was on the stage in a heartbeat, with Michael and his two left feet ambling on behind me. The dance “demonstrators” explained that friendship dances were often held between tribes for that express purpose – to get to know each other and dance to the music. So we did.

Over the past couple of decades, we have seen the emergence of hoop dancing, and there is now a World Championship event held at the Heard Museum each spring. One of our extremely talented artist friends, Steve LaRance, has created the Lightning Boy Foundation as a non-profit organization to spread hoop dancing throughout the northern New Mexico pueblos, giving young people both an outlet for their athletic tendencies and also to deepen their understanding of their culture and values. The Lightning Boy hoop dancers perform on the weekends in the Santa Fe plaza, and are often asked to perform at gala events in and around New Mexico. In past years, they have performed at the United Nations in Geneva, Switzerland and other prestigious locations.

Dance is much more than just swaying to tunes. Early man (and woman) used dance as part of a simple mating ritual. It evolved into telling stories, and even more into the communication of cultural values like thanking the deer for helping to sustain the lives of the tribe. Today, dance still has all of those components, with the addition of competition to demonstrate the artistic elements of dance.

If you have never been to a Native American dance, now is the time to do so. Spring and summer dances are frequent, and feast days are identified on most pueblo and tribal calendars. It is an experience that will forever enhance your perception of Native American culture.