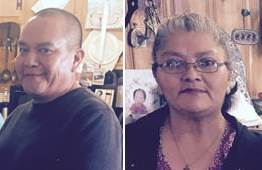 Anderson began making pottery in the eighth grade and in the last twelve years or so has now developed into an outstanding craftsman. He is among the best-known potters at Zuni pueblo who work within the traditional style. This involves gathering the clay and the natural pigments used to paint the designs on the pottery from the area around the Zuni Pueblo. His thin-walled pots are hand coiled and fired outdoors (not in a kiln), and the designs on them are a progression of the traditional designs of his ancestors. This artist’s favorite designs are rain-birds, frogs, lizards, and deer with heart-lines, rosettes, water serpents and salamanders.

Anderson is a master of interpreting the ancient designs to produce his contemporary themes. His jars are often large, but exude a remarkable appeal of smoothness and balance. His Walking-Deer design has made him famous, but he also makes whimsical Peering-Lizard pots in which the heads of a number of geckos extending over the rim of the pot. Anderson also makes whimsical ducks and parrots which are becoming increasingly sought after by collectors. In making his pots, Anderson is often aided by his wife, Avelia, who sands and polishes his clay creations. Anderson says,” she has the hands for it; I just end up breaking them.”   When Anderson collaborates with Avelia, he signs his pottery “AA Peynetsa”. Anderson Peynetsa is the brother of Priscilla, and the son of Wilma Jean Peynetsa

Since the mid 1980’s Anderson has exhibited his work at the Santa Fe Indian Market and later at the Zuni Show at the Museum of Northern Arizona in Flagstaff, as well as at the Heard Museum Show and the Eight Northern Indian Pueblos Show.

“Today, Anderson is among the best contemporary Zuni pottery painters. He is noted for his “precise, flowing lines”. He also is an excellent sculptor, applying relief figures as noted onto some of his pottery. His lizard figures seem to walk out of the surface of his pots, reminiscent of European master M.C. Escher. Anderson displays a bold and flowering style. His pottery is often quite innovative.”