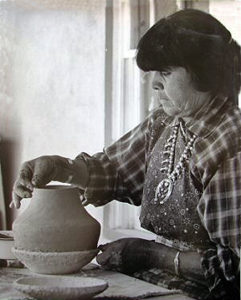 Rose Gonzales was one of the early innovators of deeply carved pottery at San Ildefonso Pueblo in the 1930’s. She was originally from San Juan Pueblo and married Robert Gonzales in 1920. Her carved pottery was a cameo in appearance, as it is not deep and ends on the sharp edge of her pottery.

Rose’s parents died from the swine flu epidemic, leaving Rose and her sister, Pomasena, orphans. The girls survived by staying at the Santa Fe Indian School. An elder woman relative, Mary Cata adopted the girls and took care of them.

In the 1920s, Rose learned first how to make polished blackware. She then learned the new technique of black-on-black pottery, using a matte black paint for designs. Rose also learned the older technique of black-on-red pottery, most associated with Tonia Roybal and her mother. Rose was credited as the innovator of deep carved pottery around 1930 at San Ildefonso. Rose Gonzales sometimes collaborated with her son, Tse-Pé, especially in duotones. She signed most of her pottery “Rose”.

In 1930, she also began her innovative process of deep carved pottery. Her carved blackware pottery was an original creation. She credits a shard of carved pottery that was found by her husband while deer hunting for giving her the idea. Using a sharp knife and a chisel she would carve out her designs. She carefully sanded her edges to create a “cameo” style with the design standing out in low relief. She would then sand the edges of her design to create more rounded forms. Some of her favorite designs were the Avanyu (water serpent), birds, clouds, seeds uncurling, thunderbird (mythology) figures and kiva steps.

When firing, she used juniper wood and cow dung, placing the pots upside down on a metal grate to allow the flames to swirl evenly around them. She would often fire up to twenty pots at a time.

Gonzales had a major influence on pottery making at San Ildefonso, and today her pieces have become highly valued by collectors. By the 1970s, she had received numerous awards from the Santa Fe Indian Market, the Gallup Intertribal Ceremonial and had become a well-known and successful potter. In fact, Rose Gonzales was still winning awards at Santa Fe Indian Market just a few years before she died.