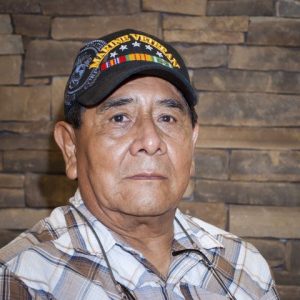 Michael Kirk was born in 1949, in Albuquerque, New Mexico, of Isleta Pueblo and Navajo decent. After graduating from Los Lunas High School, Michael enlisted in the United States Marine Corps, where he served in Vietnam from 1968 to 1971.

Upon returning to the States, he took graduate jewelry classes at the University of New Mexico, as well as jewelry casting classes at the New Mexico Community College. Michael has been making jewelry since 1971, and attributes his unique jewelry-making skills and designs to his culture and surroundings. His specialties are one-of-a-kind pieces. His jewelry reflects the richness which surrounds him every day whether it be from his own religion and culture or the natural beauty of the Rio Grande valley.

Michael lives on the Isleta reservation with his wife, Marie. He has three children and four grandchildren. Jewelry-making has become a family tradition for the Kirk clan. His grandchildren Ivan, Dakota and Hunter can be found tinkering in his workshop after school and on the weekends creating jewelry in copper; daughter, Elizabeth, heads up her father’s jewelry shop, and son, Lawrence, runs the retail business Michael started in 2006.

Michael has won many ribbon awards in art shows over the years. Although he is appreciative of these awards, he receives a greater feeling of accomplishment when he notices someone wearing a piece of jewelry he has made.