“He touched the world through his music, paintings, dance performances, lectures and prayers.” —Comanche Nation 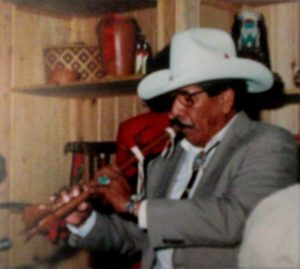 (Doc) Joyce Lee Tate Nevaquaya was named for the doctor who delivered him. He was orphaned at the age of 13 and raised by his grandparents and older brother; he spent his teenage years listening to the stories and legends of the tribal elders with his family encouraging him to draw the nearby Wichita Mountains. It wasn’t long before he was nick-named “Doc”. The name “Tate” was taken from his grandfather’s partner, when a Christian name was required upon entering the Fort Sill Indian School. His Indian name is Nevaquaya, which in English means “well-dressed.”

Nevaquaya made his home in Oklahoma working throughout his life as a teacher, a Methodist lay- minister, a lecturer, historian, dancer, singer & composer. During the 1950s, he began to concentrate on painting. After that he became an accomplished painter, winning numerous awards for his work. As a self-taught artist, Doc worked in oil, acrylic, watercolor, tempera & prints.

It was also during the 1950s that Nevaquaya first became interested in Indian flutes. In the 1960s he began researching the Indian flute in earnest. Because none of the Indian music is written, much of it is lost. He researched the flute construction and playing techniques at the Library of Congress and Smithsonian Institution collections and had copies of recordings made in the late 1800s by elders of various tribes often listening to them while he painted and based his own music on the recordings.

Doc Tate Nevaquaya brought national honor to the state of Oklahoma in 1986, by becoming the first Oklahoman to win the National Heritage Fellowship Award. Given by the National Endowment for the Arts, the award honored him as a “flutist and master of traditional arts.”  Inspired  by Allan Houser, (sculptor); Spencer Asah, and Stephen Mopope (Artist), Nevaquaya’s art enhances such collections as the Tomb of the Unknown Soldier, Queen Elizabeth II of England, the late Vincent Price, numerous major museums, galleries and other collections both public and private which span across the globe.  From painting tipis for the Smithsonian to becoming the first American Indian who performed at Carnegie Hall, Doc Tate Nevaquaya is internationally known not only for his art, but his music as well.