“Living in a dry environment, and as a reflection of what is important to my culture, most of my art work incorporates water depictions such as rain and cloud designs, cattails, and dragonflies. The style is simple, at times just a simple strand of turquoise that is inlaid into the pottery.” 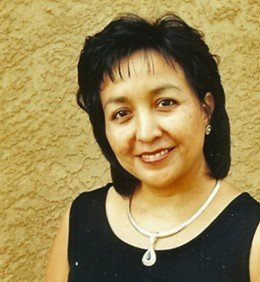 After growing up in Isleta Pueblo, Caroline Carpio attended the Institute of American Indian Arts (IAIA) where she initially studied photography. However, after taking some pottery and clay art classes that captured her interest, she saw a new path, and graduated in three-dimensional art.  It was then she was inspired to pursue traditional pottery and sculpture as her life work.

She has been making traditional pottery since 1981 and was named 2012 Artist of the Year by the Indian Arts & Crafts Association. Carpio creates elegant, stone-polished vessels using natural clay and traditional methods passed down from her ancestors. Her hand-coiled pottery is always beautiful in form, color, and styled carvings.  It is burnished to a near-perfect deep even shine. She incorporates interesting shapes, which sometimes includes lids, or impeccably sculpted appliques. Her signature style is inlaid stones, turquoise and gold beads. Caroline Carpio’s exceptional Isleta Pueblo pottery is best described as beautifully elegant.

Carolyn is a highly regarded and talented artist who works in pottery and bronze. She received an Associate in Fine Art degree from the Institute of American Indian Arts, followed by a Bachelor’s in Fine Art from the University of New Mexico. In 2001, she was invited to be an artist-in-residence for the Takeo Region International Art and Cultural Exchange Program in Japan, resulting in a certain Japanese influence in her basic Native American designs. Her work is in the permanent collections of Smithsonian National Museum of the American Indian, Takeo Buukakaikan Japan, and the Indian Pueblo Cultural Center.