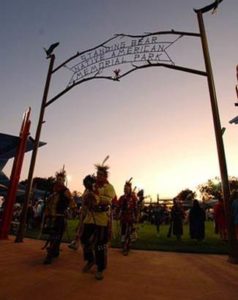 However, there is an unusual powwow called the Standing Bear Powwow, held every year on the last weekend of September in Ponca City, Oklahoma.  It is unusual in that it is the center of six nearby American Indian tribes, who join together for a large intertribal powwow.

Standing Bear was a Ponca Native American chieftain (1829-1908) who was one of the first successful plaintiffs in US Courts working to improve the legal and social standing of Native Americans.  Ponca City, Oklahoma, has dedicated a magnificent park to his memory, with a large statue and sacred dance arena.  The Standing Bear Park is a 63 acre site, complete with a very educational Museum.

The six tribes are the Kaw, Osage, Tonkawa, Pawnee, Otoe-Missouria, and Ponca tribes.  Each tribe brings a princess in traditional regalia, and the inter-tribal powwow princess is crowned.  There are traditional tribal dances, competition dances, and singing and drumming.  Of course, no powwow would be complete without storytelling and mingling of cultures.

The powwow has a variety of vendors, selling Native American items and foods.  Typical of Native American hospitality, the six tribes invite everyone in attendance to join them in a Saturday evening meal of fruit, fry bread, and corn soup.

The Grand Entry is held twice, and dancers enter in full ceremonial regalia.  It is a very casual event, with no admission charge.  The event starts on Friday afternoon, and continues through Saturday night.  Bring your own folding chairs, and get ready to enjoy a wonderful couple of days of learning and enjoying.