One of my favorite katsinam (plural for the Hopi word katsina, often shown as kachina by Anglos) is the little Hopi Warrior Mouse.  While not actually a katsina, he has earned himself a respectable place in the hearts of young and old alike for being courageous and daring.  I acquired this Warrior Mouse at the Heard Museum in Phoenix in 2000, and a delightful young clerk told me the rest of the story. 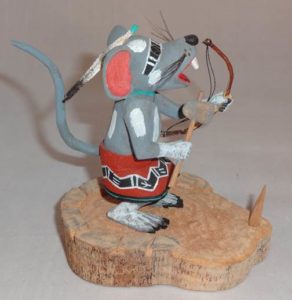 As the story goes, the village was being threatened by a nasty old hawk – he was eating all the village chickens. The old men knew he must be killed, the boys knew he must be killed, and all the women and children knew he must be killed – but no one knew how, and all their plans had failed.  The Village Chief and Town Crier were very worried and had met in private to smoke and ponder upon the subject. Even they did not know how to rid themselves of the marauding hawk.  Then late one night, a little mouse sat smoking in his little kiva – and he felt bad for the people and decided that he would kill the hawk. So that night he went to the home of the Village Chief.

He told the Village Chief he was going to kill the hawk. Although the Town Crier and the rest of the village shook their heads in disbelief, some thought maybe the mouse had special power, so they prepared anyway. A date was set, and preparations took place. The mouse had sharpened the end of a greasewood stick and dug a long tunnel from his kiva into the plaza. There he dug another hole reaching to the surface. The hawk sat watching from far away. He was angry with this mouse and flew off to destroy him – but the mouse danced close to the opening of his kiva and ducked inside each time the hawk came close.

Then finally he went into the tunnel he had dug and drove the sharp spear up through the ground next to the opening in the earth, and he went back out singing and dancing. Only this time he went far away from his kiva, and all the people thought the hawk would get him for sure. It was just then that the hawk swooped down low to snatch up the pesky mouse, but the mouse dropped down into the hole he had dug, and the hawk, who did not see the spear in the ground, impaled himself.

The villagers were amazed, and the little mouse was honored as a hero – and they celebrated. And that is how the mouse defeated the hawk.

The Hopi and the Navajo often use the katsinam as teaching tools for their young.  Their stories are parables that pass along to young Native Americans the traditions and values of the pueblo or tribe.  Each katsina has a story, and is far more than just the lovely wood carving.  So the next time you see a wonderful katsina, ask about the story – it will be time well spent.