The Navajo Nation is the largest sovereign Native American nation in the United States.  Yes, it is under Federal jurisdiction, but it operates as a separate country within its far-reaching geography. 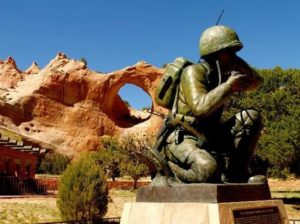 In March, Michael and I had a chance to drive through Window Rock, and we stopped at the Navajo Nation offices.  The Navajo Nation Museum is located there, as well as the Navajo Nation Zoo.  The Museum offers wonderful insights into the culture and ceremonies of the Navajo peoples, and provides a rich tapestry of the art and artifacts of this proud people.

If you want to get some original Navajo art, you have several outstanding choices.  The Hubbell Trading Post is located outside Window Rock, and is run by the National Park Service.  Inside this historic site, there are quite a few rugs and other pieces of Navajo art available.  The best, in my opinion, are those of the very talented Two Grey Hills weavers, though Ganado, Chinle, and Wide Ruins are also amazing in their complexity and quality.

But the most interesting thing we saw in Window Rock was the weather-sculpted redstone rock itself.  The Navajo refer to this as a mystical place, and their governmental offices are built at its base.  They have erected a Veteran’s Memorial at Window Rock, including a stirring bronze of the many Navajo soldiers who served, and are currently serving, in the United States armed forces.  The most famous are the Code Talkers, who provided not only an unbreakable tactical code, but also risked their lives as U.S. Marine artillery spotters in the fiercely fought Pacific theater during World War II.  Michael and I had a chance, last year, to visit with the last of the original Navajo Code Talkers, Chester Nez, before he passed away earlier this year.  The Navajo are making sure that their Veterans are receiving the proper honor and recognition that they are due.

So if you ever find yourself wandering across Arizona or New Mexico on I-40, and you are near the eastern border of Arizona, take a side trip for a few hours up to the tiny city of Window Rock.  The deeper you dig into the stories and culture of the Navajo people, the more impressed you will be.  The rock, as a geological formation, is nice to observe.  The history of the Navajo people is fascinating and well worth the time in the Museum.  But the true benefit will come from connecting with the culture of an existing, vibrant, proud people who are successfully combining their ancient traditions with the realities of the modern world.  As much as Plymouth Rock or the Golden Gate Bridge, the Navajo are a part of the American story, and comprise a rich chapter that deserves respect and appreciation.