A recent trip to Arizona was fairly typical of our journeys and explorations.  On this trip we wanted to find out more about the northern part of Arizona, rising from the high desert north of Phoenix to the mountains surrounding the Grand Canyon outside Flagstaff. 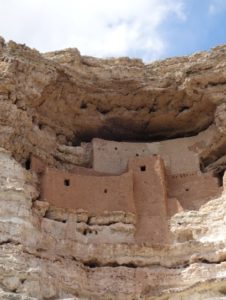 A day trip to Casa Grande, located about 40 miles south of Phoenix, started the exploration, as we learned more about the Hohokam tribe, which built Casa Grande and an extensive irrigation canal system along the banks of the Gila River over a thousand years ago.  The abandonment of Casa Grande happened about 200 years after they built their settlements, for reasons lost to history but likely involving weather changes and the ability to feed a large centralized civilization.  The Hohokam diaspora contributed to the Hopi, Zuni, and other settlements being founded in the high desert and mountains to the north and east.   The full story of Casa Grande is amazing, and one that I will be telling in future blogs.

After stopping in at the Heard Museum in Phoenix, and visiting with some of our friends in the many Scottsdale galleries, we set off to the high desert.  The terrain steadily rises from a barren desert to a thriving, high-altitude, and arid beauty.  Technically part of the Colorado Plateau formation, it contains quite a few National Parks and monuments, extending from Utah through Colorado, Arizona, and New Mexico.  The centerpiece of the region is the Grand Canyon, which I will get to shortly.

The signature characteristic of the high desert is the saguaro cactus, and we were fortunate enough to catch them in the early part of their annual bloom.  As we moved further north, the altitude continued to increase, and we transitioned from high desert to the tree-covered foothills and valleys of the southern Rocky Mountain range.  The animals are remarkably adapted to the terrain and weather, as exemplified by the cactus wrens that carve out hollows in the saguaro to build their nests.

From there, Michael and I drove north to Montezuma Castle and Montezuma Well, two locations where some of the Sinagua people (closely related to the Hohokam) settled.  Montezuma never actually came anywhere close to Arizona, but early American explorers named them for the Aztec ruler presumably to stimulate tourism.  The Castle (a National Park) is a set of cliff dwellings, where the settlers carved out caves from the sides of cliffs, some of them 70 or more feet above the base of the cliff.  The settlers would use adobe bricks to construct walls and create living spaces.  During the day, the people would go down ladders to the valley floor where they farmed and went about their daily lives.  We sat on benches in the shade of large Arizona Sycamore trees and gazed upon the cliff dwellings, recreating in our minds the daily lives of those people over ten centuries ago.  It is a peaceful, tranquil site, and the National Park Service has done a remarkable job of preservation of this ancient site.

About 11 miles to the northeast of the Castle area, Montezuma Well is a large natural limestone sinkhole, also in the Verde valley.  It is close to four hundred feet wide, and quite deep.  It is estimated by the National Park Service that about 1.5 million gallons of water rise into the well each day, draining the Verde valley area and taking up to 10,000 years to soak into the ground and emerge at Montezuma Well, flowing into the Beaver Creek area for Native Americans to grow crops.  Many Native American peoples, including the Yavapai and Hopi peoples, trace their origin stories to this site, and it has a special religious connection to them.  It is a short walk up the hill to the viewing area of Montezuma Well, but as always in wilderness areas, watch where you step unless you accidentally disturb a desert lizard or other critter.

I will continue writing about this wonderful adventure in the next blog, as we visit some of the towns in Northern Arizona, including some of the museums and galleries we visited, fantastic art shows, and of course, the Grand Canyon.