Keshi (kay-SHE) is the traditional greeting of the Zuni Pueblo people who live in western New Mexico.

The story of the Zuni pueblo continues to fascinate me, and I seem to learn more about this ancient pueblo and its people every day.  Recently, on our last trip to Santa Fe, we had the chance to stop in and visit the wonderful people at Keshi, also known as The Zuni Connection. 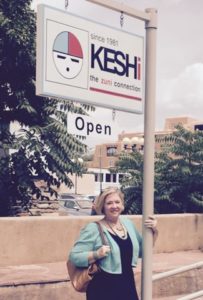 This retail store was founded in 1981 by Robin Dunlap, and is now run by her daughter Bronwyn Fox-Bern.  Initially it was an artist coop established to help the artists of Zuni pueblo with their craft, and it expanded significantly during the Native American art craze of the 1980’s and 90’s.  Through the strong efforts of Bronwyn, the artistic futures of Zuni pueblo and Keshi are happily linked.

The peoples of Zuni formed a series of small villages over a thousand years ago, the largest of which was a pueblo named Halona.  Through many centuries of existence in the southwestern New Mexico region, the Zuni peoples formed ties with the Hopi peoples to their northwest, on the Hopi mesas.  Trade developed between the peoples, and also the ability to help each other with famines, drought, or other major challenges to their lives.

One of the two big changes to the Zuni peoples came in the 1500’s with the arrival of Spanish explorers and missionaries.  The peaceful Zuni were overwhelmed with change, sometimes even resulting in the Zuni hiding on nearby mesas until the Spanish left.  Occasionally the hiding even went on for several years at a time.  But eventually the Spanish took over the Zuni culture, even changing the name of the Halona pueblo to the current name of Zuni pueblo and renaming the people as the Zuni people.

A second big change to the Zuni peoples came with the western expansion of the United States.  The land of the Zuni peoples became a Federal reservation, Anglo traders moved into the area, and the Zuni peoples now had to deal with a different type of domination.  The spread of railroads in the latter half of the 1800’s opened New Mexico to trade and tourism, leading to entrepreneurs like Fred Harvey who encouraged Native Americans to produce and sell pottery, textiles, jewelry, and other authentic items to Anglo tourists.

For the Zuni pueblo, possibly fortunately or possibly unfortunately depending on your perspective, the main railroad ran about 60 miles north, through the town of Gallup.  That meant Zuni artists, producing fabulous pots, jewelry, and fetishes, had to carry their works to Gallup for sale.  So the Zuni pueblo and its people, for the most part, lapsed into a quiet, very basic lifestyle similar to those lived by a thousand years of ancestors in the same location.

The wonderful story of Robin and her daughter Bronwyn, working with Zuni artists and providing a Santa Fe outlet for their works, is heartwarming.  The artists are so talented, and yet so few people travel down New Mexico Highway 53 (the Ancient Way) to get to Zuni.  Therefore, much of the world doesn’t get to know the outstanding works of carvers like Jeff Shetima, Kateri Quandelacy Sanchez, Sandra Quandelacy, and Dee Edaakie, or potters like Anderson Peynetsa, Alan E. Lasiloo, and the team of Tim Edaakie and Bobby Silas, or jewelers like Angie and Wayne Cheama and Effie Calavasa.

Keshi has over 600 different Zuni artists represented in their store – stop by and get to know them, and learn the stories behind the different animal fetishes, jewelry, and pottery, as well as the different artists who create these beautiful works of art.

Elah-kwa (thank you in Zuni).