Whether made by the Zuni, the Navajo – or even someone from Taos, each of these necklaces is beautiful. The squash blossom necklace, since its creation in the late 1880s, remains an elegant and stunning work of art. 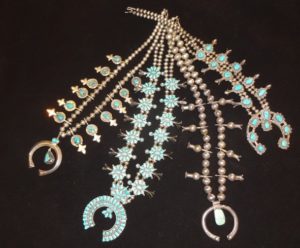 The squash blossom necklace, with its silver beads, as well as the naja crescent moon centerpiece, is remarkably unique. The flower pendant is actually a representation of the Spanish-Mexican pomegranate, but is commonly referred to as a squash blossom.

When the necklace with its crescent moon or naja came into existence, the Navajo people had been under the influence of Spanish Conquistadors for hundreds of years. The naja symbol eventually began to represent agriculture and was first used as a pendant on a simple cord. As the Navajo learned the art of silversmithing, they began to make silver beads – Navajo pearls- to string with the naja. The Navajo called the squash blossom bead “yo ne maze disya gi”, which means “the beads that spread out.”

Most squash blossom necklaces that can be found today were made during the 20th century, and retain the same sense of beauty of the original pieces. Turquoise and coral are most commonly inset with the silver beads and the naja pendant. No matter whether simple silver beads, or needlepoint turquoise, or larger chunks of turquoise or coral – each one is magnificent and should be worn often.