The Dancing Rabbit Gallery is pleased to represent noted Hopi artist David Dawangyumptewa, whose colorful mixed media work embeds his Native American tradition, and also achieves contemporary abstraction. In our Gallery, we have ten of David’s works, including originals, printer’s proofs, artist proofs, and a limited edition signed print. We are very pleased to have pieces in our Gallery that span David’s current career. These are among my favorite works, and I hope you enjoy viewing them as much as I do. 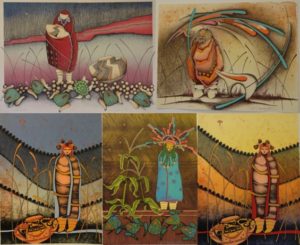 David’s art presents multiple layers of depth and meaning to be discovered by the viewer: the composition itself; the symbols depicted; and the larger story behind them. His pictures have a layered quality filled with color, themes and positive images. The style and content of David’s works are reflective of his Hopi background and Water Clan affiliation and contain many abstracted variations of traditional water symbols: frogs, dragonflies and turtles. Many of his earlier pieces have symbolic people included, while his later works have more geometric design elements. When talking with David, he says that “My art is filled with the spirit of the Hopi people.” He takes extreme care to faithfully portray the lively spirit and gentle nature of the Hopi, and each of his works radiates peace and harmony with Mother Earth.

David was raised within the Hopi and Navajo Nations and has studied at the Institute of American Indian Arts, Haskell Institute in Kansas, and Northern Arizona University. David has been a very significant arts advocate lobbying to bring greater access for First Nations Peoples of Canada to U.S. markets. He has been instrumental in the Native American Arts Market, SWAIA, and Flagstaff Arts projects, including the founding of the Flagstaff Festival of Arts and the Viola Awards, for which he has been nominated for the 2016 Visual Arts Award.

His work has been recognized with awards from the Museum of Northern Arizona, American Indian Heritage Foundation, Santa Fe Indian Market, and Colorado Indian Market. David Dawangyumptewa’s work is in many prestigious museums and he has been represented by several noted galleries across the United States. It is impressive to note that he was given a solo exhibition at the Wheelwright Museum in Santa Fe. This past year he has had exhibits at the Museum of Northern Arizona and at Zen Mountain Gallery in Jerome, Arizona.