As a small girl, I accompanied my parents on many, many trips to the American Southwest.  Though many of my earlier memories are somewhat vague due to the darkening shroud of time, one stands out with crystal clarity. 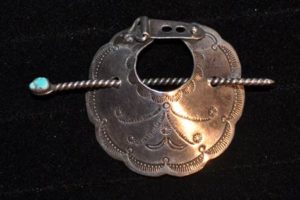 Mom and Dad would take me, and later on my younger siblings as well, on wonderful road trips through New Mexico, Arizona, Colorado, and Utah, exploring and learning about the different groups of indigenous peoples who lived there thousands of years ago.  I remember climbing through some of the cliff dwellings at Mesa Verde, and walking all about at Chaco Canyon.

Those experiences were great, but my favorite memories are when I got a chance to meet Native American artists and talk with them.  That was so much better, in my young opinion, than seeing some old monuments and rocks.  I got to hear their voices, see their clothing, and learn to appreciate them as people just like me, but with a different cultural background.

And it was on one of those trips, when I was only about 7 or 8 years of age that one of my earliest, most vivid experiences was created.  Mom and I were walking down the portico of the Palace of the Governors, where Native American artists set up their displays and show their wares.  I don’t remember if Dad was walking behind, or if it was just the two of us that afternoon.  I think I had my entire life savings in my little purse, but there really wasn’t anything being shown that really caught my interest.  I was just having a grand time stopping and admiring, and hearing my mother talk with some of the artists that she knew.

Suddenly, the light caught a silver object near the front of one of the blankets, and it called out to me.  It was a simple silver pony-tail holder, and at that point in my life, I was all about pony-tails.  I remember looking at it, and then asking my mom if I could pick it up and look at it.  I think she knew right away that it was going home with me, so she and the artist both smiled and watched me examine the lovely silver art from all different angles.  After careful consideration, I dug into my small purse and pulled out enough money for the pony-tail holder.  I don’t know if mom helped out or if the artist gave me a break, or both, but somehow I had enough money for the piece.  As I grew up, I proudly wore that piece for years, until the time came that I was out of the pony-tail stage and into young woman hairstyles.

But I kept the piece, as it was one of my earliest memories of Native American art and meeting and learning from Native American artists.  Clearly, it is not one of my most valuable pieces, but some things can’t be measured in money alone.  To me, the memories of getting the pony-tail holder are priceless, because that simple piece of silver helped launch me on a life-long journey of learning about the peoples of the American Southwest and their legacy of art.