Baskets are a beautiful addition to any collection as well as amazing works of art—and I love them.

Basketry is one of the oldest means of carrying and storing foods and materials, like grains or shells.  Ceremonial and religious occasions, like weddings, also featured the use of baskets.  Made from naturally 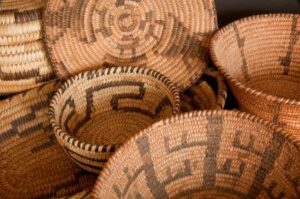 degradable materials, baskets tend to fade and decompose over time, so it is really hard to get an accurate estimate of when basketry began.  Many estimates, using basket impressions on fired pottery, make a case for basketry being widely used as long as 10,000 years ago.  It is something that we have all done as children in summer camps, and it is still widely practiced and utilized around the world today. Baskets available on the market today were probably constructed no more than 120 years ago. Baskets for retail sales became quite popular after the arrival of the railroad in the Southwest. Baskets made between the 1880s and 1950s tend to be the most valuable, particularly if they are in good condition, well-made, and have an interesting design. But these factors can also make a newer basket very desirable.

Many Native Americans have used different materials for their basket weaving, creating ornate and stunning designs.  Typically, they used the materials available to them in their local areas, such as the use of yucca, willow, and sumac in the American Southwest. Weavers from different areas developed unique forms and structures in their basketry.    Some tribes, such as the Cherokee, developed extremely complicated weaving styles like the double-weave, where an inner wall and outer wall are woven together for strength and durability.    Navajo tuss baskets were coated in pinion pitch to make them water tight for storage of water and other liquids.

Most of the American Southwest tribes use the coiled method with local grasses or the plaiting method with wider stems and leaves. Coil baskets are easily recognizable by their spiral coil design, where a starting point at the bottom of the basket is created, and the coil is systematically spiraled around that starting point, stitched together at frequent intervals.  Sometimes the stitches are animal sinew, but more often they are composed of other grasses or even threads.  This method offers more strength and more opportunity for decoration. We see this technique from the Tohono O’Odham (Papago) baskets, when they created lovely baskets from strips of yucca and Devil’s Claw.  Navajo (Dine’) baskets are commonly made from the sumac and are known for the central knot used to begin the coiling process.

As with many of the Native American art media, the basketry symbols tell stories, like the man in the maze of the Tohono O’Odham. Many other tribes and pueblos used woven symbols, which can be both exciting and challenging to interpret.  These symbols are enhanced with colors, with specific materials like yucca giving a green color, Devil’s claw creating a lovely black/brown color or dried or dyed materials providing different colors.

Sometimes it can be difficult to identify baskets from different areas of the world, as many baskets from Mexico or parts of Africa are strikingly similar to those of the Native American basket makers.  Even within a specific tribe, basket makers may use slightly different techniques.  Unlike pottery, silver jewelry, or paintings, baskets are not signed and thus provenance is challenging to determine.  It is imperative when purchasing an authentic Native American basket, you choose a reputable gallery/store which follows the Indian Arts and Crafts Act of 1990, which is “a truth-in-advertising law that prohibits misrepresentation in marketing of Indian arts and crafts products within the United States.” (US Dept. of the Interior Public Law 101-644).