It seems like Santa Fe’s Indian Market, the Zuni Show, and IFAM all happened just yesterday.  It was a swirl of wonderful, chaotic activity all at the end of August.  That was followed by a virtual explosion of powwow’s, dances, and festivals around the country over the Labor Day long weekend. 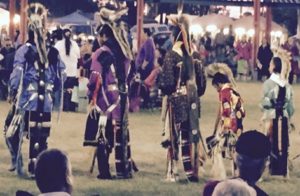 In addition, a number of festivals continued throughout the month of September, marking the start of the fall celebrations.  One of our favorites is the Standing Bear Pow Wow in Ponca City, Oklahoma, where five tribes come together for a joint celebration.    To kick off the month of October, the Indian Pueblo Cultural Center in Albuquerque always has a huge weeklong celebration, coinciding with the Annual Balloon Fiesta, and it also draws large, appreciative crowds.

A little further north in Oklahoma, the Chickasaw Nation held its annual, weeklong meeting and celebration in Tishomingo, headlined by Governor Anoatubby’s State of the Nation address.  In that address, he said that “the Chickasaw Nation was stronger than ever, and that it is continuing to prosper.”  In addition to laying many foundation stones for future success, the Governor has been working to preserve and expand understanding of the Chickasaw language, one of the pervasive elements of a culture.

And of course, what would a month be without a fabulous art market to attend.  This coming weekend, located outside Tulsa, Oklahoma at the Hard Rock Hotel & Casino, is the Cherokee Art Market, one of the largest Native American art shows in Oklahoma.  With a juried competition and over 150 highly talented artists coming from around the country, this promises to be another stellar event.  We have several friends who will be at the show, including Karin Walkingstick (Cherokee), Marcella Yepa (Jemez Pueblo/Chickasaw), Troy Sice (Zuni Pueblo), and Chase Kahwinhut Earles (Caddo).  Visiting them will be a pleasure, and I am sure we will make many more friends at the show as well.

This time of year, there is a lot going on.  Many tribes have harvest celebrations and powwows to celebrate the bountiful growing season and the blessings of Mother Earth, and I sometimes wish I could be in several different locations at once to take it all in.  At the same time, we run the risk of sensory overload, with the amazing art, beautiful dance regalia, and highly talented artists sharing a piece of their culture and skills with us. It is a time of the season to be alive, and to relish the celebrations before the long winter’s slumber overtakes us.