On a recent trip to Colorado, we decided to spend a few days in the little town of Manitou Springs, a neighbor of Colorado Springs and tucked up in the foothills of the Rocky Mountains.  We had never been to Manitou Springs before, but wanted to use it as a base for several days of exploration and adventures, so Michael and I looked at each other and said “Why not?”  The history of Manitou Springs is notable for the sparkling clean air and healing waters, but also as a gateway through the mountains to the west. 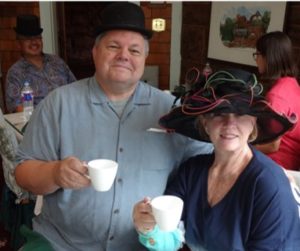 Our adventure started when we checked in to The Cliff House, an old Victorian hotel built almost 150 years ago (1873).  We were somewhat reassured by the AAA Four Diamonds, typically a good evaluation of quality.  The hotel has won numerous other awards for excellence.

The Cliff House has only 54 rooms, each unique and quaint in only that way old hotels can be.  Many of the rooms have gas fireplaces, and some have jetted spas and steam showers.  Because the hotel was originally designed for travelers arriving by train, there is no parking lot – all cars are given complimentary valet parking in a nearby facility.  Prior guests have included Clark Gable, President Teddy Roosevelt, and famous tycoons of business, many of which have suites named for them.

The amenities at The Cliff House are many, ranging from a superior restaurant to an elegant front porch for afternoon refreshments, to an interior library with ample seating and lovely décor.  I think, however, what Michael and I enjoyed the most was the constant pampering from the staff – friendly, supportive, but never intrusive.  Exactly what one would hope to find at a stellar resort.  The exterior façade lends itself to many weddings and small conferences, and the modern necessities like wi-fi are available but hidden beneath the recently renovated Victorian trappings.  This is one that we have marked on our “we will be back” list.

As we toured around Manitou Springs, there were a number of sights we wanted to explore. Located at the base of Pike’s Peak, Manitou Springs is a haven for day hikers and more serious mountain explorers.  There are also a number of unusual shops lining the main street, some hearkening back to historic times and others firmly rooted in the hippie explosion of the 1960’s.

An easy place to start is the Pike’s Peak Highway, a wide and paved road that takes visitors up to the very top of Pike’s Peak for some dramatic views of the Rockies.  It is a long and winding route, but well worth the time to visit.  There is a second way – the Pike’s Peak Cog Railway – that we’ll cover in another story.  Either way, the trip is wonderful.

Located in Manitou Springs is the Miramont Castle, built in 1895 by a French priest, Jean Baptiste Francolon, who wanted a home for himself, his aristocratic mother, and her staff of servants.  Tours are offered almost daily in this quite unique architecture, which borrows from several different styles.  Mostly built in local Colorado native green sandstone, the castle features everything from Chateau to Queen Anne, Gothic to Moorish, Flemish to Venetian and more.  Father Francolon designed a home that he wanted and was happy with the different blending of styles.

The castle itself is built into the mountain, with most levels having access outside to the mountain stairs.  There are over 40 rooms in this 14,000 foot castle, and the Manitou Spring Historical Society has worked hard to preserve the story of the castle as well as adding a fascinating Firefighters Museum in the basement.

But the most fun we had at the castle was taking afternoon tea in the Tea Room.  A true Victorian tea, complete with a hat stand for ladies to wear fun Victorian hats while taking tea (and the very attentive staff will bring men’s hats for the gentlemen), is not to be missed. I particularly enjoyed the Chef’s creation of a cream of maple corn soup with hickory bacon and a side of scones, and Michael quickly laid waste to his Mother Mary Baptiste BLT sandwich.  We enjoyed pots of tea – I had the four course High Tea, and Michael had a pot of a yummy peppermint chocolate tea.  We finished with decadent desserts – the Babka is really fun, and ice cream sundaes feature Castle-made ice cream.

Also located in Manitou Springs is the Cave of the Winds, where you can take a guided and narrated tour through nearly a mile of natural caverns.  The tour takes about an hour, and you might want to think about bringing a sweater or jacket, as it can get really chilly deep in the mountain.  They even have a Lantern Tour (which we did not go on) that takes adventurers down in the cave with only hand-held lanterns to light the way.

Finally, consider stopping at the Manitou Cliff Dwellings.  Be aware that the Cliff Dwellings are reconstructions of what real cliff dwellings look like, NOT authentic or original.  We were somewhat disappointed in that none of the literature mentioned this, implying it was original like many of the other cliff dwellings throughout the Southwest.  There is a truly massive gift shop, again selling mostly non-Native American and not authentic tourist trinkets, but we did find a very nice museum in the basement with some very old pieces of pottery.  If nothing else, going through the museum part is worth the letdown of the rest.

All in all, consider Manitou Springs as a nice home base for several days of exciting exploration in and about the Rocky Mountain range west of Colorado Springs.  We have more stories to tell about this area, so keep watching for them.