One of the gems of Denver is their Art Museum.  We stopped by recently to see their Native American collection, reputedly one of the largest and most comprehensive in the United States.  We set aside a day, and went to see for ourselves. 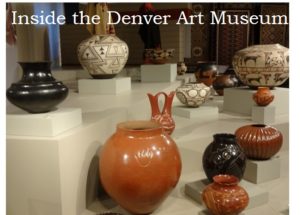 Typically, when one hears about “large collections,” there are a few nice pieces and lots of acceptable or representative pieces. Not so with the Denver Art Museum.  The Museum curators have taken great pains to select the best of their extensive collection for display, with over 90 percent never being displayed to the public, similar to the Smithsonian Museum.  So seeing not one, not two, but a couple of dozen Nampeyo bowls in excellent condition was truly stunning.

I use Nampeyo as an example for several reasons.  First, I love pottery.  Though this collection has far more than just pottery in it, and I will talk about that in a minute, my first love is pottery.  Second, Nampeyo is a Hopi Matriarch potter of the late 19th and early 20th centuries, and her revival of historic First Mesa Hopi designs opened the doors to many more potters who began demonstrating the significant level of quality of Native American artists.  Third, there is something about her iconic migration pattern that calls to me, and I can gaze at her pots in admiration for hours on end.

But the Denver Art Museum has far more than just a couple of dozen classic Nampeyo pots.  In just the pottery area alone, there are many sterling examples of pottery done by historic Tusayan, Kawaikuh, and other early American peoples.  Preserving these pieces that in many cases are over a thousand years old is a delicate task, one which the curators of the Museum are readily capable of handling.

They have extended the Native American story to include many of the other Southwest Indian historic potters, such as a lovely set of ollas by Sara Fina and Margaret Tafoya, Maria Martinez, Marie Z. Chino, and others.  And the pieces they display are not just small, ordinary examples of these artists’ works, but impressive, carefully crafted, and inspiring levels of craftsmanship.

And yes, the Museum does bring the story to the present day by including many of the best current Native American potters in the American Southwest.  We delighted in seeing pots by our friends Anderson Peynetsa, Nathan Youngblood, and many others, who are continuing the tradition of excellence in Native American pottery.  Some use historic images and designs, while others are extending the designs and form factors in new ways, but all are remaining true to the traditional methods of gathering the clay, shaping the pottery, and firing the shapes.

As I said earlier, the Native American collection of the Denver Art Museum is much more than just pottery.  Denver is in a central location that touches on the Navajo and Hopi Nations to their southwest, the 19 New Mexico Pueblos to their south, the Utes, Arapaho, and Northern Cheyenne in the immediate Colorado area, and many Plains Indian tribes such as the Apache and Lakota Sioux to their immediate east.  As a confluence of differing cultures, the Denver Art Museum has strived to represent each story in a meaningful and understandable manner.

Plains Indians are not an area in which I have a lot of knowledge, as my interests are primarily in the Southwest.  However, the Denver Art Museum brings to life the culture of these diverse peoples, showing videos, providing interactive displays for children, and displaying magnificent examples of elaborate basketry, beadwork, and tools used by the Plains Indians.  Because of the migratory nature of many Plains Indian tribes, finding historic artwork can be difficult, though the Denver Art Museum had a number of beaded robes and garments that were simply stunning.  Michael and I spent a couple of hours (after we finished drooling over the pottery exhibits) admiring the artistry and culture of these Plains Indians, and I think I will be extending our Southwest focus a little into Colorado and Utah in the near future.

Finally, needing a quick respite from our tour of the Native American collection, we headed down to the Palettes, expecting the typical diner fare.  What a surprise we had to end our afternoon.  The setting was quiet and filled with sunlight, and the linen tablecloths set the stage for what became an elegant, affordable meal.  Part of the Kevin Taylor Restaurant Group, this chef-driven museum restaurants has sister operations at the Denver Opera House, Limelight Supper Club in Denver, and Rouge steakhouse in Denver.  All of the sister operations work in conjunction with the Denver opera schedule, so check in advance for open dates.

After our long day, we hadn’t even scratched the surface of the Denver Art Museum’s collections, and we are planning on going back in the near future to extend our education.