Last year, we were so excited to visit the Zuni Show in Santa Fe, located at the Scottish Rite Temple in Santa Fe.  Just north of the downtown Plaza and Indian Market, the show consists of artists from the Zuni Pueblo, unlike the international Native American artists at Indian Market. 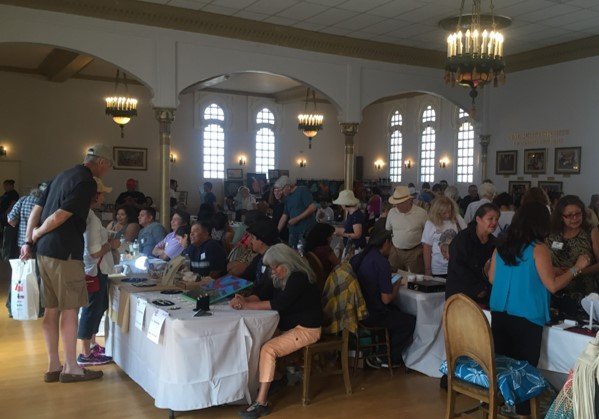 The show last year had over 100 artists, and was a crowded venue on both days, with artists and visitors alike exuberant about the new venue put on by the Keshi Foundation.  Robin Dunlap, who has been deeply involved with the Zuni peoples since teaching there a few decades ago, wanted to create a show that celebrated the wide variety and high quality of the Zuni pueblo artists.  Last year was fraught with nervousness, and everyone wondered if visitors would tear themselves away from Indian Market and visit the Zuni Show.

Fast forward to this year.  Based on last year’s resounding success, the Zuni Show expanded to over 150 artists, setting up a tent pavilion outside on the Scottish Rite grounds, plus the large meeting hall utilized last year.  The dances expanded, the food and music expanded, the historic film exhibition expanded, and the overall success of the show also expanded.  This year, the Knifewing was the theme of the show, and Knifewing is the Zuni spirit who protects the Zuni peoples.  We proudly wore our Knifewing pins, courtesy of Bronwyn Fox, and Michael wore one of his Alonzo Hustito bolo’s to honor the Zuni peoples.

We planned an afternoon at the Zuni Show, visiting our friends from the largest of the New Mexico pueblos, many of which we had just seen in May at their MainStreet Festival in Zuni.  It is so wonderful to build relationships, and get warm greetings (“Keshi” in the Zuni language) and hugs.

As with Indian Market, many of the artists were working long hours to prepare their pieces – jewelry, paintings, pottery, woodwork, and sculptures.  Zuni jewelry is distinctive, with the precisely carved small stones set into the silver.  And the pueblo is known for its stone carvings of animals, known as fetishes.  The fetishes are said to represent the spirits of the animals, each with its own unique characteristics.

The show is organized by the Keshi Foundation, headed by Robin Dunlap.  She also set up the initial Zuni Coop in Santa Fe in 1981, which is now Keshi, the Zuni Connection, run by her daughter Bronwyn Fox.  The Board and a large number of volunteers have made this show a “must attend” in their first two years, and we are eagerly looking forward to the third annual show next year.  Our only complaint – it is the same two days as Indian Market, and there are only so many hours in the day.  Otherwise, we would spend both days at the Zuni Show, enjoying the culture of this amazing group of people.  It is a wonderful problem to have – two shows right next to each other, each with superb artists, each with compelling reasons to attend.

We have heard some comments from Indian Market officials and artists that the Zuni Show is just piggy-backing on the success of the Indian Market, and we have mixed feelings about this.  If the Zuni Show is not worthwhile, it will fade away with diminishing crowds.  If it is worthwhile, it gives Indian Market attendees another reason to come to Santa Fe in August, possibly expanding the revenues of both groups.  To a degree, it is like the number of galleries on Canyon Road – more galleries result in more competition, but also draw larger crowds.  In the final analysis, I think each of these two shows will benefit from the competition, constantly being pushed to raise their own standards, and constantly attracting larger crowds.  I just wish we could stop the clock in August, and spend several days at each show, giving them each the time that they deserve.